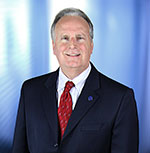 Dr. Brownlie was appointed Chief Engineer in September 2009. He has been a vice president since 1988 and served as senior vice president and business group president from December 2005 to September 2009. Dr. Brownlie is a registered Professional Engineer in eleven states and has managed various programs with a primary focus on water resources and environmental services, including work with the U.S. Army Corps of Engineers, the U.S. Air Force, U.S. Bureau of Reclamation, and U.S. Department of Energy. He has served as project manager for complex water infrastructure and restoration projects throughout the United States. He holds BS and MS degrees in Civil Engineering from the State University of New York at Buffalo and a PhD in Civil Engineering from the California Institute of Technology.