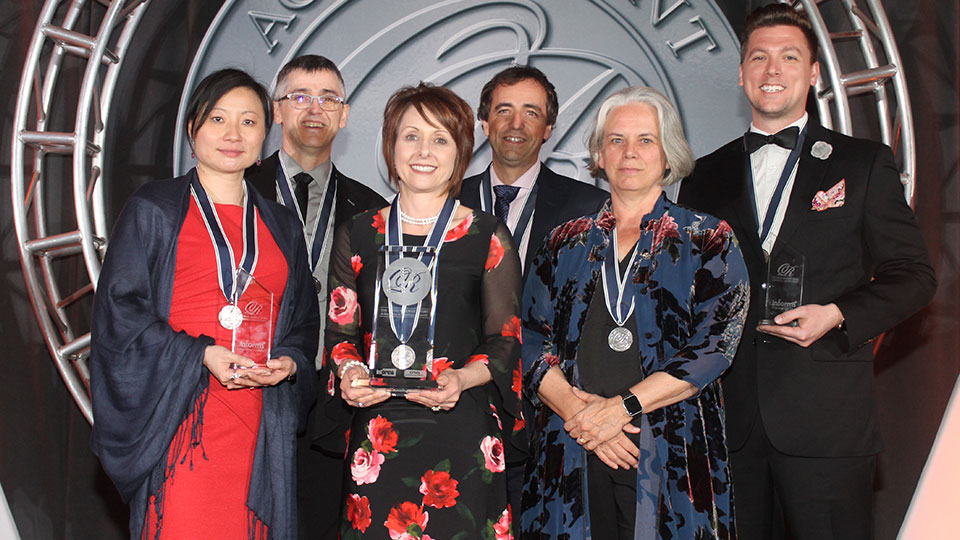 Tetra Tech won the prestigious Franz Edelman Award, which recognizes the ways that operation research and analytics are improving how people live and work around the globe. This accolade, which was announced at the INFORMS gala on April 15, 2019, recognizes Tetra Tech’s partnership with the Louisville Metropolitan Sewer District (MSD) in Kentucky to implement real-time control (RTC) software to manage the city’s sewer network.

The Edelman Award is the highest award in operation research and analytics. This year’s finalists included IBM, Microsoft, the Boston School Board, the Spanish National Aviation Authority, and Vattenfall, one of Europe’s largest producers of electricity. We congratulate our team on this recognition for their innovative approach in Leading with Science® to help our clients solve their most complex challenges.

Tetra Tech began developing Csoft, an innovative RTC software solution, in the mid-1990s to efficiently and sustainably manage sewer networks in real time based on rain forecasts and sensor readings. Csoft is applied as an adaptable and robust solution complementary to traditional engineering methods to address the various challenges inherent to urban water management, including sewer overflows, stormwater runoff, water quality, flooding, and drought. Many sewer districts have seen these challenges exacerbated by climate change in recent years.

Louisville MSD pioneered the implementation of intelligent control in the United States as part of its long-term control plan to reduce combined sewer overflows (CSO) and improve operation. The district implemented Csoft as part of its RTC system to automate decisions for storing or routing flows in its wastewater collection system. In addition to averting spending funds to build new infrastructure, the solution has had a beneficial impact on community waterways.

Tetra Tech’s initial RTC feasibility studies using Csoft for Louisville MSD showed significant CSO reductions at a relatively low cost by maximizing the storage and conveyance capacities within the existing system. The resulting unit cost per gallon for overflow reduction is 4 to 10 times lower than the cost of constructing traditional storage solution alternatives without using RTC. The Louisville RTC system with Csoft has been implemented in phases. Current reductions show the system stores or mitigates more than 2 billion gallons per year of CSOs and has saved approximately $200 million to date compared to traditional methods, while improving the community waterways. Once the district’s Integrated Overflow Abatement Plan projects are constructed, RTC will allow Louisville MSD to eliminate or capture and treat 98 percent of combined system flow.

“Tetra Tech has been a great partner with Louisville MSD implementing RTC program optimization,” said John Loechle, engineering technical services director for Louisville MSD. “We have found Tetra Tech to be responsive to the needs of Louisville MSD and the RTC program, and they deliver quality work in a timely fashion.”

The solution has been in successful operation in Louisville since 2006 and has withstood the test of time and changing climate. It also has been successfully implemented in the United States, Canada, and France.