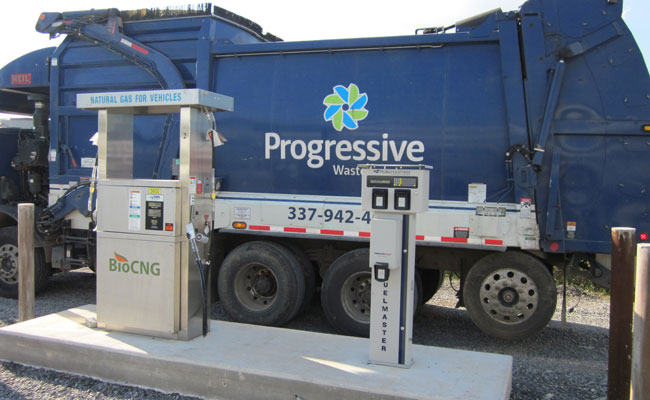 Tetra Tech's BioCNG group is leading a team to assist the St. Landry Parish Solid Waste Disposal District with implementing an expansion of their successful BioCNG™ biogas conditioning system at the district’s landfill in Washington, Louisiana. Cornerstone, A Tetra Tech Company, is the co-inventor of the patent-pending BioCNG™ system. The District also commissioned BioCNG to design and construct an off-site renewable natural gas (RNG) fueling station with natural gas back up.

The St. Landry Parish Landfill, which has been active since 1986, produces landfill gas (LFG); excess LFG is continuously flared as part of a voluntary carbon reduction initiative. The district currently conditions and compresses the methane exclusively from LFG to fuel a fleet of vehicles used for solid waste operations, contracted refuse hauling, and law enforcement. Commissioned in 2012, the fueling station was one of only two in operation in small-scale applications in the United States. The new expanded system is the first in the nation to haul RNG off-site to a remote fueling station.
BioCNG provided design, permitting, installation, and startup for the biogas-to-RNG facility. BioCNG first installed a BioCNG™ 50 gas conditioning unit at the landfill in 2012 and later added a BioCNG™ 100 expansion unit with an off-site fueling station in 2015. BioCNG provided the gas cleanup skids, RNG storage, and fast fueling stations. The expansion system included a satellite RNG station that is fueled with RNG hauled from the landfill via a tube trailer with natural gas backup.
The original system produced up to 210 gallons of gasoline equivalent (GGE) per day of RNG vehicle fuel, at a lower cost than the cost of diesel. The fuel is produced from 50 standard cubic feet per minute of LFG, containing 50 to 55 percent methane. The district originally used the fuel to power 15 vehicles, including its own cars, utility trucks, the sheriff department’s cars, light duty trucks, and a light duty van. The expanded system triples the RNG fuel production to almost 700 GGE per day and will be able to fuel the existing vehicles plus a fleet of 10 to 12 refuse hauling trucks.
The end results include significant air quality benefits, unique environmental education opportunities for the local community, and an invitation from the State of Louisiana for the District to travel to France to discuss their success story during a trade mission.

The U.S. Environmental Protection Agency awarded the district a Landfill Methane Outreach Program LMOP Award in 2012, recognizing the project for generating renewable energy from a local source while also protecting the climate and strengthening the economy.