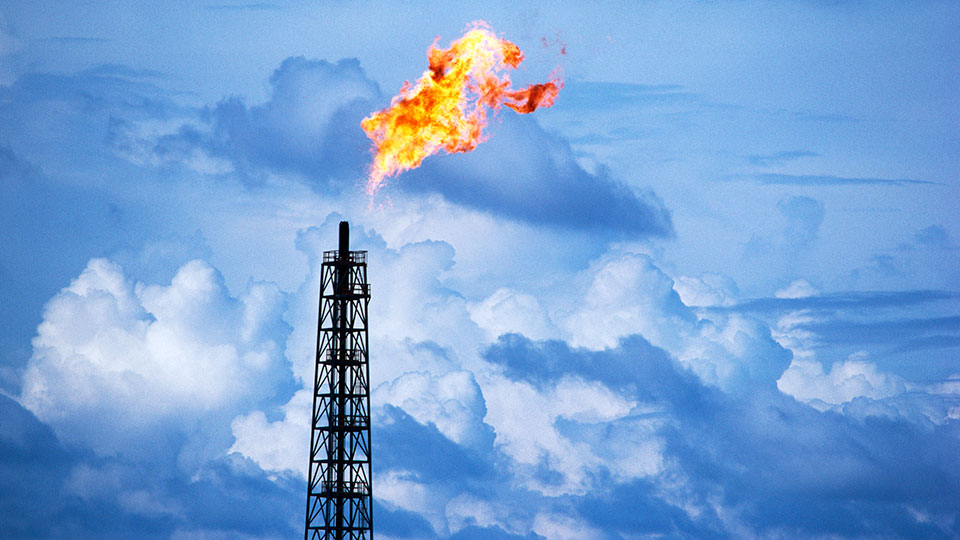 Associated gas (AG) is produced from the reservoir during oil production. In this post, Tetra Tech’s Artur Davtyan, manager of project finance, discusses how AG could be used to fuel power plants, used as bottled gas, serve as a feedstock, exported as liquid natural gas (LNG), or put to other productive use, with contributions by John Beardsworth and William Newton of Hunton Andrews Kurth, LLP. All opinions expressed in this post are the authors’ own.

Instead of being put to productive use, an estimated 140 billion cubic meters of AG is flared every year, equating to more than USD$10 billion of resource value. Flaring contributes approximately 350 million tons of CO2 emissions to the atmosphere annually, in some cases having been cited as having a negative impact on the health and livelihoods of local populations.

While much progress has been made in recent years to reduce flaring, AG continues to be flared at thousands of oil production sites around the world. A further reduction may be achieved through a market-oriented approach to commercialization that can produce a win-win-win: for the oil producer, the buyer and seller, and the environment.

Levels of Associated Gas Flared by Country in 2017 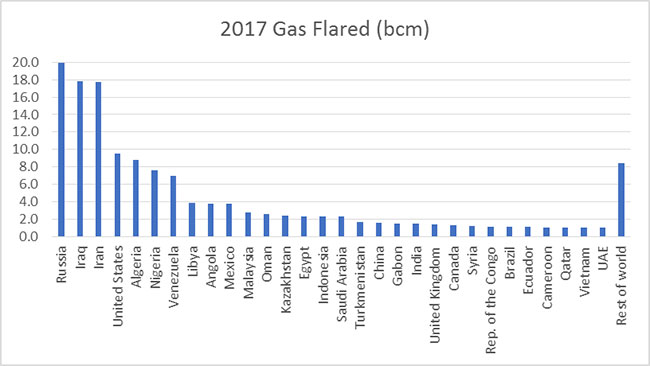 THE DIFFICULTIES IN COMMERCIALIZING AG

AG is frequently viewed by oil producers as an unwanted byproduct of oil production. Though flaring can be reduced through the commercialization of AG, doing so requires the resolution of many constraints and the creation of appropriate incentives.

The technology to address the problem of AG flaring is well developed and can include gas reinjection for enhanced oil recovery (EOR), power generation, compressed natural gas (CNG), liquefied natural gas (LNG), gas-to-liquids (GTL), and processing and pipeline development. Rather, AG continues to be flared due to a combination of factors related to physical characteristics and infrastructure, and the legal, policy, and market factors that must be overcome to successfully commercialize AG.

While the scale and complexity of AG flaring may seem discouraging, some large oil producing countries and oil producers have taken important steps to reduce flaring. Routine flaring is no longer as widely accepted as a standard business practice. Countries such as Saudi Arabia, Norway, Kuwait, the United Arab Emirates, and Canada all have taken steps to harness and put AG to productive use. Other countries also now require that any new field development plans include provisions for sustainably managing the AG and putting it to productive use.

While producers typically have the right to use AG to support oil production (e.g., reinjection for EOR, power production at the site), under many production sharing agreements or statutes, governments often have ownership of any surplus AG. Unfortunately, the governments of developing countries often do not have the expertise or the capital to develop their own AG capture and monetization projects. Typically, the oil producers, who are physically in charge of production, have technical expertise, and are better capitalized. Thus, one option to provide for the commercialization of AG is to remove the government’s preemptive rights to authorize private sector development of AG capture and monetization projects or the private sector sale of the AG.

Where a government owns AG, another option for monetization is for the government to sell the AG itself. A properly administered government-run auction can bring benefits that a producer-run auction may not be able to offer, such as enabling buyers to purchase from multiple flare sites across the country, providing tax incentives, or addressing political risk.

Many governments in oil-producing countries are familiar with the lease of oil blocks, so the sale of AG may seem like an easy next step. However, differences between AG buyers and oil block lessees need to be factored into the design of any AG monetization efforts. Oil can more readily be exported and sold in USD on the international market to any number of creditworthy parties. AG buyers may need to monetize the product locally, if it is not monetized through an export project, relying on local customers and sales denominated in local currency. Depending on the locale, this can introduce far more risk into a monetization project and attract a different universe of buyers.

To maximize the chance of success, the government seller needs to consider the perspective of the AG buyer and address various issues in the gas sales agreement.

Readers familiar with international project finance will recognize these as key features to making a buyer’s project bankable. While there are tools to make AG sale and related monetization projects more bankable, structuring the terms and conditions must be done with great care to attract investors.

The tools to achieve a bankable gas sale are available. Where the sale is conducted by the producer, these tools are largely in the hands of the producer. However, where a government is the seller of gas, some of the key factors for creating a bankable project are still under the control of the oil producers, and the commercialization must be done in a manner that includes the producers. For example, the oil producers are in the unique position of controlling production and physical delivery of any AG. As a result, they remain best positioned to manage that risk and to stand behind any such a guarantee (e.g. through a make-whole payment if the AG supply is interrupted). This dynamic effectively requires a government-producer-buyer tripartite relationship. This tripartite relationship, however, is not necessary if the producer itself commercializes the AG.

If putting AG to productive uses were as simple as putting the product up for auction and populating a data room, AG flares would have been extinguished across the globe. While some progress has been made in successfully commercializing AG, enactment of new—or refinement of existing—government policies may be needed to further support its commercialization.

Some of the policy issues are broader than AG. For example, subsidized competing fuels or electricity prices in some countries frustrates the sale of AG or end-products produced from AG feedstock into the local market. Domestic, integrated, incumbent utilities and the legal and regulatory frameworks applicable to the gas sector also can prevent or stifle the private sector’s development of a natural gas-based business. These policy issues go beyond the AG sector.

Other policy approaches can be targeted at AG, where a mix of carrots and sticks can be used to create incentives for the commercialization of AG. Incentives can include a mix of fiscal incentives, AG commercialization profit sharing, fines, and taxes. As an example, under a carbon tax system AG would not just have zero value, as it does now, but would have negative value since the flared gas would count in the calculation of the carbon footprint. However, several other approaches to setting appropriate flare gas fines exist and do not need to be linked to a carbon tax calculation. Governments also need to adopt transparent and efficient regulatory regimes that cover enforcement of operational standards, flare gas measurement, monitoring, and other requirements. Transparent enforcement of the flare gas regulatory regime creates the right incentives for producers to participate in flare gas commercialization.

There is no one-size-fits-all solution to the commercialization of AG; each set of market reforms, incentives, and policy and regulatory reforms needs to be tailored to the specific country. Significant collaboration between government and producers is needed when tailoring the regulations and policies to ensure they not only meet the government’s objectives of reducing the flares, but also do not unintentionally materially impact oil production. 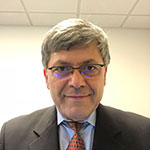