Upgrades and Standardization of the Barrage des Quinze Dam 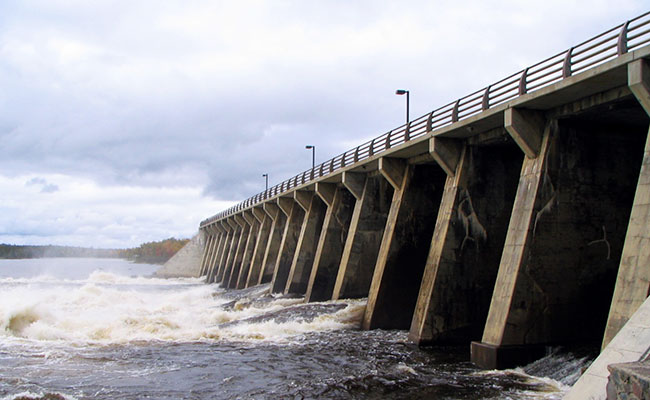 The Barrage des Quinze Dam is a structure that regulates water flow and helps with flood control. It is on the upper Outaouais water network in the municipality of Angliers in Abitibi-Témiscamingue. The dam was built in 1905 and restoring facilities and structural improvements are necessary for it to continue providing renewable energy that does not produce greenhouse gases.

Before the Tetra Tech-RD Energy consortium began work at the dam, it consisted of a concrete spillway and 2 dikes on each side; 19 spillway sluices, fitted with wooden beams spillways; and managed the level and flow discharged from the Barrage des Quinze Lake. The spillway was 143 meters long. A mobile gantry crane on rail was used to maneuver the beams. Electrical systems were in a temporary shed on the left bank abutment. The dam crest was used for the passing of Route 391. A secondary dam approximately 600 meters southwest of the dam, which had undergone major work in 2004, completed the closure of the tank.

The dam’s maximum discharge capacity could not be considered fully available because of various problems of reliability and functionality of the mechanical equipment. According to previous studies, the dam’s concrete structure was in good condition. However, concrete sample showed signs of alkali-aggregate reactivity. In addition, contact between the concrete structure and the bedrock appeared to be deficient in some areas.

Tetra Tech aimed to improve the functionality and reliability of the discharge apparatus, while obtaining full discharge capacity, along with geotechnical and structural stability of the entire dam. This was done to ensure compliance with safety standards under the Act on Dam Safety (RSQ c. S-3.1.01) for resistance, flood safety checks, earthquakes, and ice loads. To address all concerns, the client planned to provide the structure with a number of self-lifting system valves and activate a new device for modern mobile lifting for the other spillway sluices.