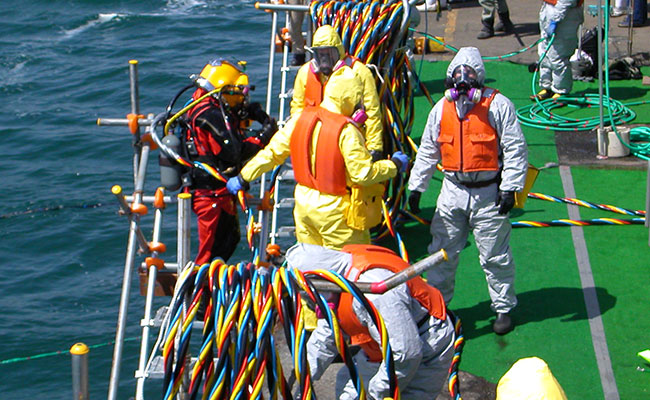 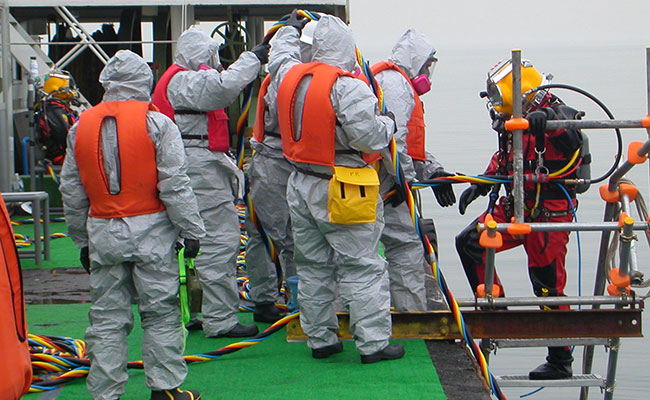 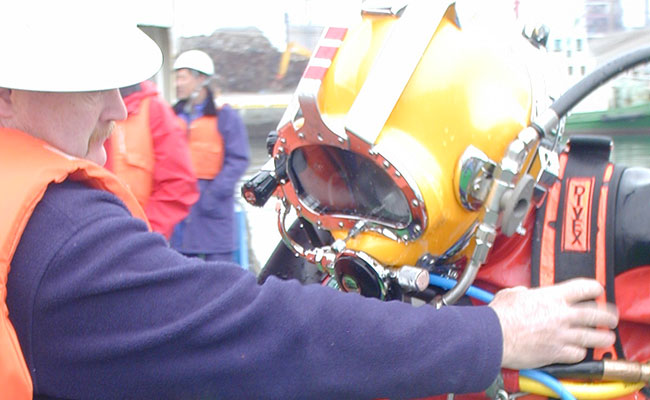 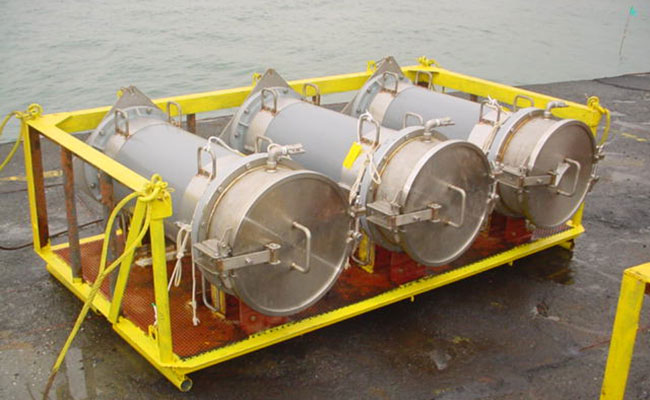 At the end of World War II, Japan’s Imperial Army disposed of chemical weapons into Kanda Harbor, including primarily 50-kilogram (kg) bombs filled with mustard (HD) and lewisite, both blister agents, as well as 15-kg bombs containing a vomiting agent. Japanese divers discovered the bombs in the harbor, and the Government of Japan contracted a Japanese firm to remove and dispose of the highly hazardous munitions. The firm conducted a geophysical survey—identifying approximately 538 anomalies of interest—and subcontracted Tetra Tech to identify the munitions items, determine whether they were fuzed or unfuzed, package and containerize them, and transfer the containerized munitions to the firm for final disposal by thermal destruction.

Underwater recovery of munitions poses tremendous risks attributed not only to the dynamic marine environment but also to the explosive and chemical hazards of the items being retrieved. To prepare for these difficulties, Tetra Tech’s UXO dive team received refresher diving instruction prior to deployment, practicing for supplied-air dive operations to retrieve heavily corroded, possibly leaking, deformed, and rusted munitions that were potentially fuzed and armed. The project was executed off the Port of Kanda, a highly populated area in the Fukuoka Prefecture on the southern island of Kyushu, Japan.

Tetra Tech’s UXO dive team safely recovered 367 chemical warfare munition items without incident. In accomplishing this mission, Tetra Tech became one of the first companies in the world to conduct a recovery operation of chemical weapons from a marine environment.

Tetra Tech assembled an international team of explosive ordnance disposal divers and diving medical technicians. Prior to mobilizing to Japan, our project team reported to the Divers Institute of Technology in Seattle, Washington, for 10 days of refresher training. This pre-mobilization training allowed us to immediately deploy upon arrival in Japan.

Divers used closed-circuit surface-supplied breathing apparatus due to the possibility of exposure to chemical agent if munitions were breached underwater. Divers also wore radiation badges under their dry suits, which were designed to be chemical-resistant.

Working from a dive barge, Tetra Tech divers identified each item and assessed whether it was acceptable to move. Items considered acceptable to move were then placed into soft package containers and moved to an underwater platform for X-ray confirmation of the presence or absence of fusing. Munitions items were then placed in hard-pressure containers and turned over for transport to a disposal facility constructed near the dive site.