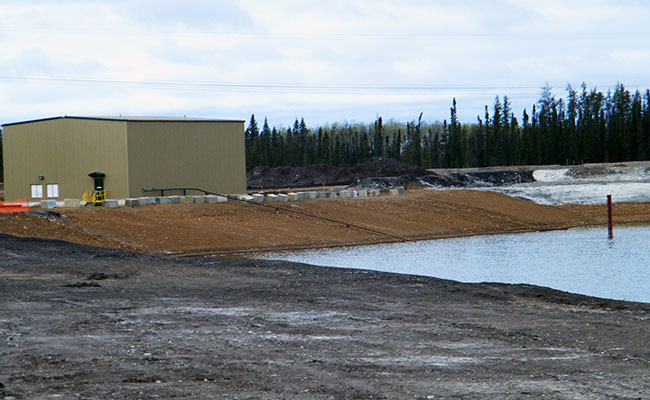 As part of the client’s commitment to minimize the environmental impact of its facility, all dyke seepage and surface runoff water is collected and returned to a tailings pond. As the mine’s dyke construction progressed, so did the need to relocate the mine’s seepage pond.

Before Tetra Tech became involved with the project, water was pumped out of an existing seepage pond using a floating barge containing two large centrifugal pumps. Because of its distance from the shore, this arrangement was difficult to maintain and operate.

Tetra Tech proposed a simple, effective solution—a new seepage pond with a concrete wet well-style sump and submersible pumps. The 11-meter-deep well is adjacent to the new pond and connected by a couple large, buried pipes. It provides the foundation for a pre-engineered pumphouse enclosure including pumps, piping equipment, and overhead crane.

Six electric submersible pumps inside the wet well discharge into a common 36-inch header supported on the pumphouse floor. The header feeds a new three-kilometer-long graded pipeline corridor to transport the seepage water into an existing tailings facility. The entire pumping system, including drainage, is fully automated with both local and plant remote control capabilities.

Power for the system is supplied by a modular electrical substation, which steps down plant-supplied 25-kilovolt power to 600 VAC local distribution, powering the pumps and local electrical services. The project also included a washcar and rest facility for site personnel.

The change from a floating barge to a permanent foundation has dramatically improved operator and maintenance access to the pumps and increased the system’s overall reliability.