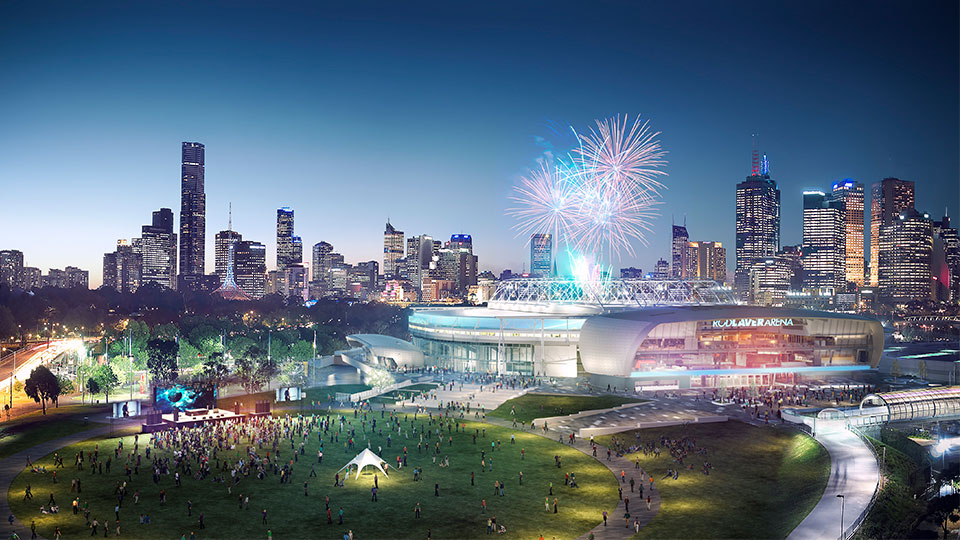 The Rod Laver Arena in Melbourne, Victoria, Australia was originally completed and opened to host the 1988 Australian Open tennis tournament. The arena was developed primarily for tennis as part of the National Tennis Center’s development and to replace the existing Kooyong Stadium. When not used for tennis, the center now serves as a multipurpose arena with the capacity to feature international sporting, entertainment, and music events.

The refurbishment of Rod Laver Arena, Australia’s highest grossing entertainment venue, is part of the AUD$338 million (USD$232 million) stage two redevelopment which commenced in 2014. The main elements of the refurbishment include a new eastern-facing multi-story main entrance, which also provides food and beverage facilities; an expanded public concourse space; accessible entrances to the seating bowl; significant back-of-house expansion and upgrades including upgrading of player and artist facilities; expanded loading dock and increased rigging capacity to over 100 tons to ensure that the arena continues to host the best events in Australia across all modes of operation. The completion of the redevelopment is scheduled early 2020 in time for the Australian Open.

Part of Tetra Tech’s responsibility included development of the full design and documentation of electrical infrastructure expansion and upgrades throughout the facility, and amalgamation of existing assets with the expansion and upgrade, which included the replacement of the main switchboards. One of the more challenging aspects of this element of the project included the relocation of the main information technology (IT) server room to expand patron access to the facility. At the same time the electrical infrastructure needed upgrading, including their uninterruptible power supply (UPS) and distribution boards, to support the IT server racks.

A key challenge was to implement all refurbishment works while the venue remained fully operational throughout the project, including through four Australian Open tennis tournaments during the construction period. All stages of the project have been delivered on time, within budget, and to the client’s considerable satisfaction. All necessary building codes have been adhered to, including LEED requirements to achieve Gold Status; and AS3000 (Australian Standards), Disability Code AS1428 (access and services).