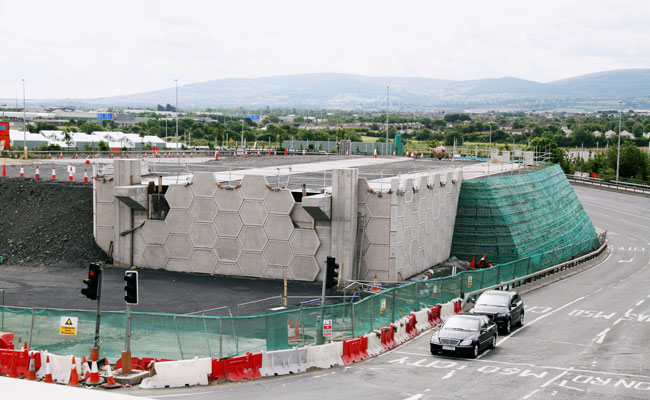 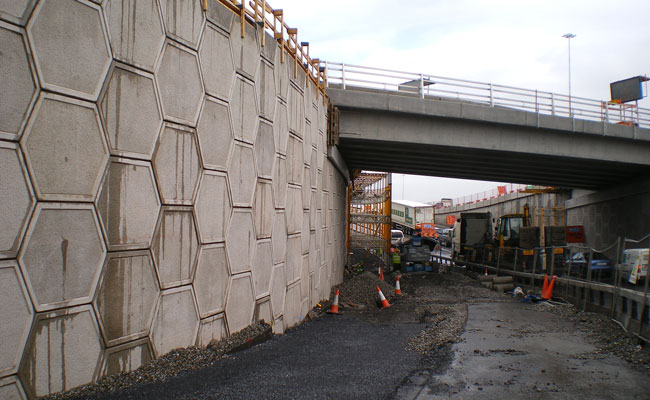 The M50 motorway upgrade project in Dublin, Ireland, aimed to greatly reduce traffic congestion on the country’s busiest road. Tetra Tech was appointed by Grontmij, one of the joint venture contractors selected by the Irish National Roads Authority, to provide geotechnical support for the project, in particular for the N7 interchange improvements.

The project involved adding a third lane in each direction over 31 kilometers of the motorway, effectively doubling its capacity, and upgrading ten junctions. The project included significant upgrading of the three interchanges, with the N4 and N7 interchanges transformed into free-flowing junctions. Significant challenges included up to 100,000 vehicles passing through each day, limited work space, and no lane closures allowed.

The new N7 interchange is grade separated, with the M50 passing underneath. Two bridges from the roundabout were retained, with three new road bridges and two pedestrian/cyclist bridges built.

Originally, the remodeled junction was to have three levels, but the tender team realized at tender stage that this could be changed to a free-flowing two level interchange. The site’s tight work space and traffic management constraints dictated that the design accommodate limited size and scope of construction plant and techniques. The geotechnical aspects of the design were critical to the project, with detailed design incorporating a combination of techniques including bored piled walls, steepened slopes, rock cuttings, and soil nailing. Our team identified appropriate limited-access construction techniques and carried out the detailed design work in close collaboration with the contractor. Throughout the design development, detailing was adapted to suit the tight working space and to ensure that impact on traffic was minimized. Collaboration within the contractor’s design team was the key to the successful completion of the project.

Our two-level interchange solution, along with the reuse of the two bridges and lowering the road in front of the abutments, led to savings of more than £5M for the tender team and ultimately the Irish National Roads Authority. For drivers, the upgraded interchange has improved safety and greatly reduced journey times.