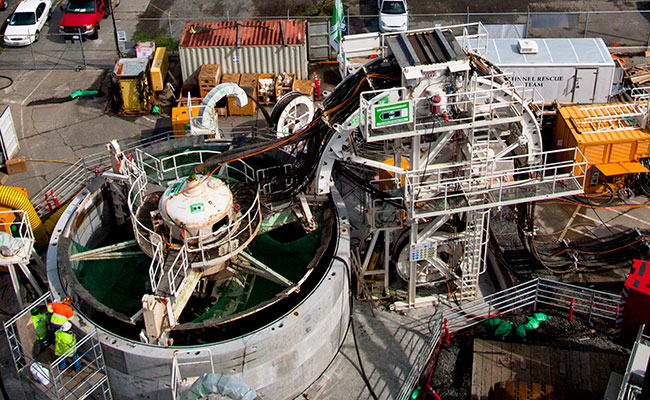 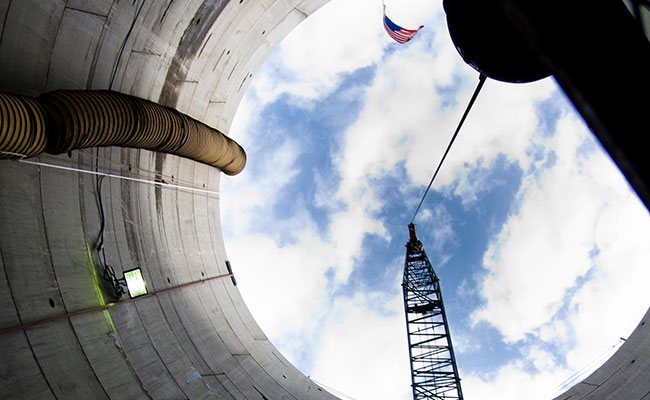 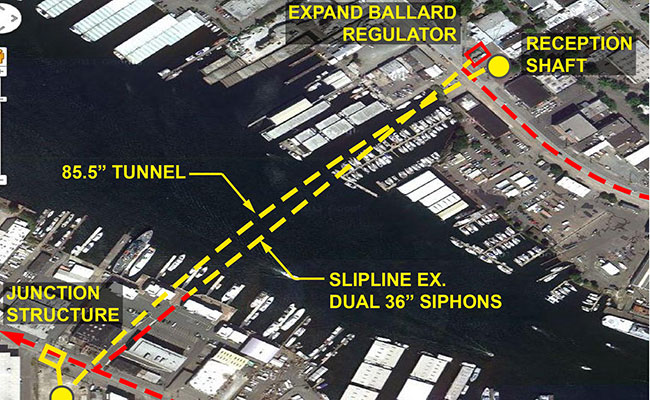 King County Department of Natural Resources Wastewater Treatment Division is responsible for the major sewage conveyance and treatment facilities serving the greater Seattle area. The Ballard Siphon is a critical element in the sewage collection system that serves thousands of households in North Seattle. Concerned about the structural integrity of the 1935 twin-barrel, wood-stave siphons that run beneath the busy Lake Washington Ship Canal in Seattle, the County turned to its on-call contract holder, Tetra Tech, to come up with a solution.

The design team found that the existing 36-inch siphons, which showed some signs of deformation, were in sufficient condition to slip-line new 30-inch butt-fusion-welded HDPE pipe inside of them. A new parallel 84-inch siphon also was constructed to reduce the risk of combined sewer overflows into the Lake Washington Ship Canal and to bring the facility under control. The 1,977-foot tunnel needed to be more than 60-feet below the bottom of the existing ship canal to construct within competent soils.

King County is extremely happy with the entire team’s performance and how everyone pulled together to make this a very successful project.

When the original site for the launch shaft was suddenly withdrawn, Tetra Tech’s project team worked with the County’s real estate division to quickly locate and negotiate an alternate site. Given the increased distance to the new site, the project team had to use Earth Pressure Balance Machine (EPBM) to tunnel on a complex curved alignment and stay within an existing easement. The EPBM substantively reduced project risk while satisfying the neighboring property owner’s needs.

During construction, the use of a Herrenknecht Vertical Shaft Machine (VSM) to drill the launch shaft was approved. This was the first time this type of shaft technology was used in North America. The Herrenknecht VSM robotically constructs tunnel shafts by precisely controlling the descent of the precast liner segments, allowing construction of deeper shafts without dewatering in high groundwater areas and without manned entry.

Maintaining sewer flow during the project was critical. In the absence of diversion options, our team evaluated flow records to determine the driest period when the contractor could make final connection to the existing system and complete the work.

To minimize disruption to traffic and local businesses in the busy marine industrial area, construction activities were sequenced and suggested traffic control plans were prepared for each phase. Temporary traffic detour routes, channelization diversions for lane closures, and safe passage for the public allowed for a smooth completion of the new siphon system.

The Ballard Siphon can now deliver up to 83 million gallons per day of Seattle’s wastewater flows under the Lake Washington Ship Canal to the West Point Treatment Plant. The siphon performed as designed during the heavy rains in October 2014 and prevented any combined sewer overflows.

In 2015 the American Council of Engineering Companies (Washington Chapter) presented its Best in State Gold Award – Original or Innovative Application of New or Existing Techniques to Tetra Tech for our design of the Ballard Siphon.