Photo Courtesy of USAID/GGI and the Parliament of Georgia

Photo courtesy of the Government of Georgia 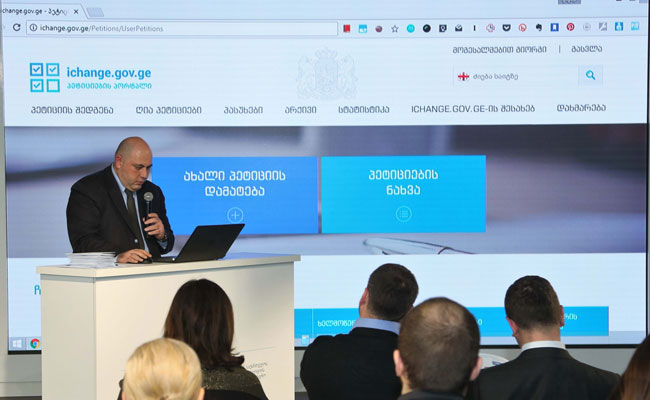 Photo courtesy of the Government of Georgia

Transparency and accountability are at the heart of any well-functioning government. In Georgia the election of a new government in 2012 caused a shift of power from the Presidency to the Office of the Prime Minister that catalyzed the advancement of various good governance reforms and initiatives. The U.S. Agency for International Development (USAID) is supporting these efforts through the five-year Good Governance Initiative (GGI) to improve administrative and financial management of GOG institutions, including Parliament; increase the openness of government; strengthen policy development and lawmaking processes; and support institutional oversight.

As USAID’s implementing partner under GGI, Tetra Tech is improving public administration at all levels, pursuing whole-of-government reforms in policy coordination and strategic management. We are focusing on bolstering key governance reforms designed to establish and strengthen critical legislative systems, processes, and practices that will provide greater government transparency, accountability, and effective operations and service delivery. Project reforms include strategic planning and performance management; participatory policy and legislative development; performance-based budgeting, implementation, and oversight; and intragovernmental and public communication and coordination systems. The team works across many institutions, including the Civil Service Bureau, the Prime Minister’s Office, multiple ministries, the State Audit Office of Georgia, and Parliament to create holistic and integrated improvements to enhance GOG effectiveness and the satisfaction of Georgia’s citizens.

A major focus of GGI is to improve public administration, policy coordination, and strategic management at all levels through technical assistance and training. To increase citizen engagement in these reforms and in decision making, GGI launched an E-Governance participatory budgeting mechanism, developed by Tetra Tech. This innovative tool surveys thousands of citizens about their fiscal priorities, and results are used in the urban development planning process.

To promote effective governance at the local level, we are deepening the existing level of decentralization and strengthening the power of local authorities to perform their tasks through legislative reform and capacity building. The GGI team is supporting the Ministry of Regional Development and Infrastructure's efforts to plan and implement decentralization reform to achieve higher efficiency and effectiveness and increase citizen trust in the state and its functions.

In addition to the E-Governance tool for citizen engagement, our team developed the i-Change portal—a user-friendly website where citizens can create online petitions for initiatives that speak to their needs. The portal enables them to create e-petitions for the issues that are important to them and provides a platform to gather signatures from other citizens across the country. Information is fed directly to the government, and GOG has committed to discuss petitions supported by at least 10,000 signatures and respond within 3 months. Surveys of E-Governance users have shown that this process has increased both the public’s trust in the government and the transparency and accountability of the government and its services.

Tetra Tech works closely with parliamentary committees to support evidence-based policy-making, enhancement of public awareness, and engagement in the legislative process. These efforts include piloting Regulatory Impact Assessment (RIA) methodologies on select pieces of legislation, nationwide public discussions held by the Budget and Finance Committee, and assistance to committees in developing and implementing strategies and action plans. We also are working to strengthen links between Parliament and the State Audit Office to improve oversight and develop the capacity of internal audit units to foster organization and consistency in their operations.