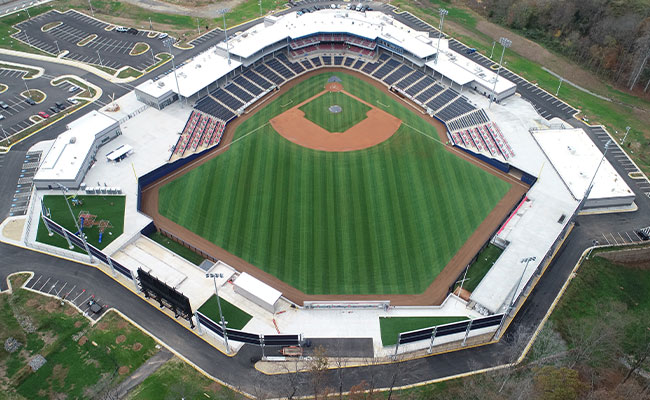 The City of Fredericksburg, Virginia, and the Fredericksburg Nationals selected Tetra Tech for the design and construction of a minor league baseball stadium.

Our client cited Tetra Tech’s experience with this level of stadium design was the key differentiator for the project. The stadium hosts numerous events beyond baseball, such as concerts, holiday and light shows, and community events. The City of Fredericksburg’s City Council voted unanimously to approve the state-of-the-art ballpark with a cost of approximately $35 million.

Since 1996, team owners have developed plans and looked at various sites and locations for their new stadium. Tetra Tech’s services helped them achieve a state-of-the-art stadium by including an artificial turf field, LED lighting, and backstop netting from the stands to each baseline.

Due to the COVID-19 pandemic, the 2020 minor league season was canceled. However, their Major League Baseball affiliate, the Washington Nationals, took full advantage of the empty ballpark to maintain social distancing when they did not have enough room to practice as an entire team in their stadium. This resulted in half of their team practicing at the new Fredericksburg Stadium during their 2020 season.