In Region 7, Tetra Tech plays an active role in the BioWatch program, which is managed by the U.S. Department of Homeland Security (DHS) and jointly operated by EPA, U.S. Department of Energy, Centers for Disease Control and Prevention, U.S. Department of Defense, Federal Bureau of Investigation, and state agencies to detect and respond to an airborne release of biological pathogens shortly after the release has occurred, enabling maximum protection of the nearby population.

Under the Superfund Technical Assessment and Response Team (START) II and III contracts, Tetra Tech has worked closely with EPA and the St. Louis County Department of Health in Missouri to develop and update sampling plans and provide training to parties potentially involved in follow-up response that would identify the nature, viability, and extent of any agent(s) that may present a threat to the surrounding population. These efforts have contributed to overall awareness and preparedness of those responders. We periodically inspect and maintain BioWatch sampling kits in the city of St. Louis and St. Louis County to be used if Phase I sampling is required (including replacement of expired or updated items, as needed).

Tetra Tech also has compiled jurisdictional profile information and developed Phase I and II sampling plans for BioWatch monitoring locations in the St. Louis area. Our START personnel have attended BioWatch Advisory Committee meetings and other meetings and workshops, as requested by EPA, and have provided periodic Phase I and II sampling training for EPA, START staff, and hazardous materials personnel.

Masters of (Dealing with) Disaster 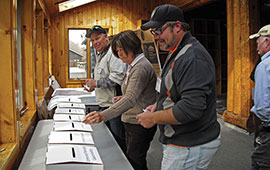