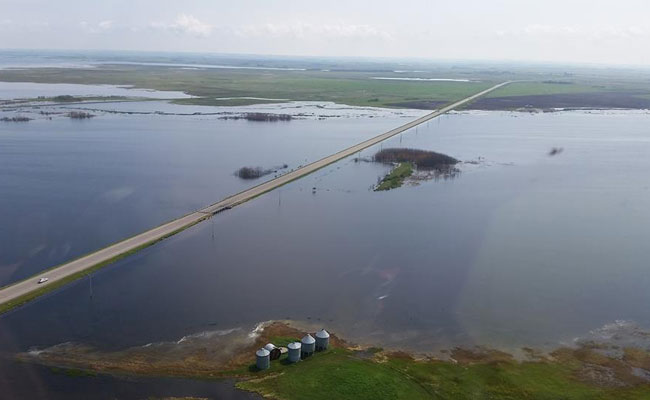 In mid-February 2015, Saskatchewan Highways and Transportation commissioned Tetra Tech to provide engineering design and construction management services for raising a section of highways 6 and 16 near Dafoe, Saskatchewan, Canada. In the past decade, the Quill Lakes rose 6.5 meters (approximately 21 feet), leaving the surface of the roadway just 0.9 meters (3 feet) above the water. From January to May of 2015, the lakes rose another half meter (approximately 1.5 feet), reaching threatening flood levels and putting the two roadways and other infrastructure in the area at risk.

In the span of 2.5 months, Tetra Tech completed the hydraulic and geometric design, produced tender documents, and provided construction administration for widening and raising the threatened roadway. The engineering solution incorporated techniques to allow for construction within water during late winter and early spring conditions to continue while accommodating traffic through the construction zone, and to be completed prior to spring runoff. Tetra Tech’s ability to complete the project in the minimum time possible was essential, as the spring snow melt began earlier than in previous years. The spring snow melt was expected to raise water levels in the lakes and cause flooding of the existing highway, making completing the project prior to the potential flooding essential.

The project presented several challenges including widening the road within the water and unusually warm and windy weather. Unusually warm weather contributed to melted snow in the watershed basin, leading to rising lake water levels and deterioration of the earth haul road, ultimately causing the road to have significant failures that needed to be repaired during the haul. In addition, the highway had to stay open to through traffic during construction. Traffic was accommodated by closing and building one side of the highway at time.

The windy weather on the large lake caused waves to erode the granular material as it was being placed. Throughout the project area, tied concrete block matting and rip rap were incorporated as armor along the highway sideslopes to protect them from wave action erosion caused by lake waters. The project team procured the concrete block matting quickly at a time of year when sourcing large quantities of local rip rap was difficult. It provides a sturdy erosion control system that accommodates vegetation growth.

The project included the removal of a short span bridge, which was replaced with six 2x45 meter—or approximately 6.6x148-foot—culverts. This replacement helped reduce the cost for our client and ensure Tetra Tech was able to raise the existing highway elevation in a shorter amount of time to allow local traffic to return to normal.

To ensure on-time completion, Tetra Tech administered the project under a separate contract for each of the three major components: aggregate crushing, highway widening, and surfacing.

Tetra Tech received the Association of Consulting Engineering Companies-Saskatchewan Brian Eckel Award in the category of Transportation for the Highway 6-10 grade raise at Quill Lakes. Watch a video about this project.