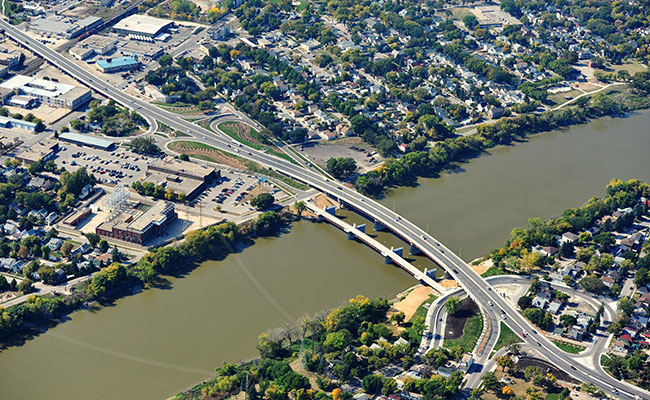 In Winnipeg, Manitoba, Canada, Tetra Tech is helping to eliminate the substantial traffic challenges related to replacing a major overpass and bridge.

The Consortium was successful in their plan to balance the overall costs, maintenance, and impact to the citizens of Winnipeg. Their efforts provided a much-needed replacement for aging infrastructure, with minimal disruption to a busy artery.

Tetra Tech’s innovative approach was critical in gaining stakeholder support for the project. Motor traffic continued using the existing bridge and overpass while the new structures were being built. Once motor traffic was transitioned to the new structures, part of the existing structures took on a new life. The existing Red River Bridge was reconstructed into a dedicated structure for active transportation, such as bicycle and pedestrian traffic. The active transportation superstructure was constructed in the alignment of the existing Red River Bridge by reusing the piers.

To ensure consideration of the most cost-effective, constructible solutions, Tetra Tech worked closely with PCL Constructors Canada to develop the design. Tetra Tech further collaborated with Plenary Roads Winnipeg to develop their 30-year maintenance plan, ensuring that the project would continue its success long past the construction phase.