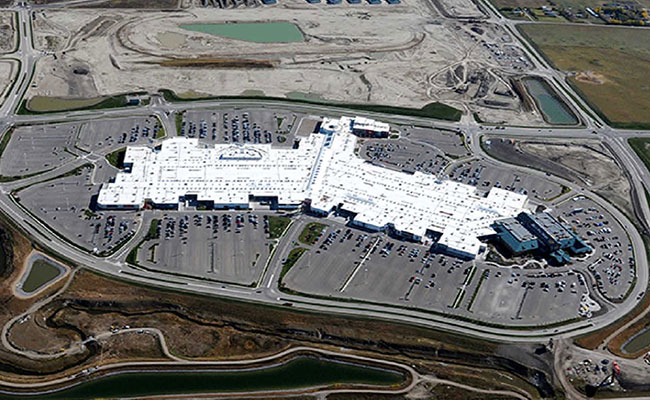 The ideal location for Alberta’s largest single-level shopping center, CrossIron Mills Mall, did not have the most ideal conditions for construction. The mall is located in Balzac, between the city of Calgary and one of Calgary’s closest and fastest growing suburbs, the city of Airdrie. Tetra Tech was hired to make the less than ideal conditions suitable for the planned development.

CrossIron Mills has almost 1.2 million square feet of retail space. It was built on a foundation of approximately 1,400 bored, cast-in-place piles on a site constructed and graded with more than 2.6 million cubic feet of engineered fill. The site includes stormwater retention ponds, roadways, and parking lots.

The large building footprint required that Tetra Tech develop several engineering solutions. Significant additions of engineered fill and extensive site grading were used to convert the site from a large slope to a flat pad. Tetra Tech performed continuous construction monitoring of the engineered fill and compaction monitoring. Native soils were a challenge because of their high silt content. Tetra Tech tightly controlled moisture levels during compaction to prevent instability.

Tetra Tech poof-roll tested the entire building footprint, in addition to roads and parking areas, because all the concrete slabs had been poured from the truck rather than being pumped in because of special finishes and the use of exposed concrete as an interior design feature.