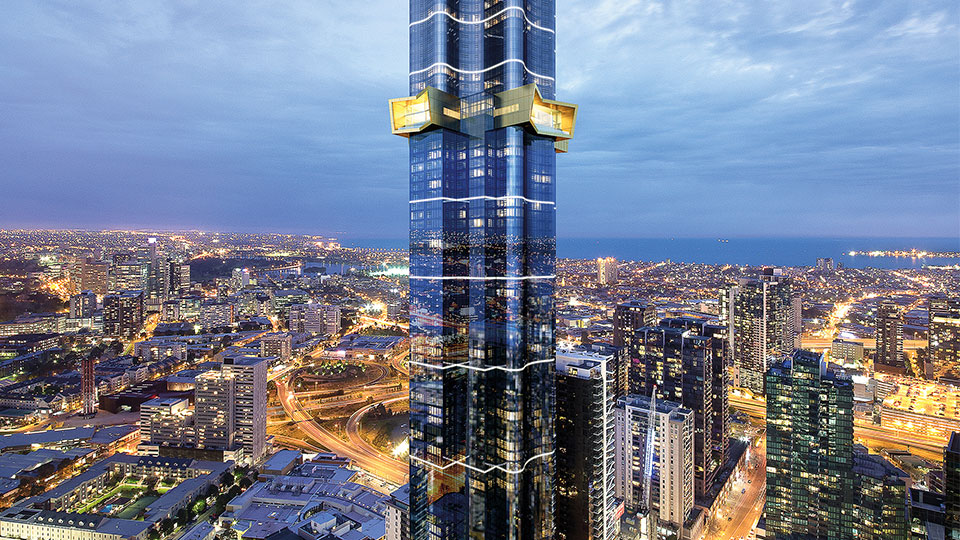 When completed, Melbourne’s Australia 108 skyscraper will become the tallest building in the Southern Hemisphere, seizing the title from Melbourne’s Eureka Tower, which was completed in 2006.

Located in the Southbank precinct of Melbourne, the building will contain the highest occupied floor level in Australia. The development consists of a 1,000-foot-tall apartment building, with 1,105 apartments over 100 floors and the penthouse spreading across the entire 100th floor. The building houses significant resident amenities on level 12, with further leisure facilities on levels 70-71 known as the ‘Starburst,’ owing to the exterior design aesthetic inspired by the Commonwealth Star on the Australian flag as a visual representation of the sense of community fostered within the building. The luxury facilities include two infinity pools, spas, a gym, sky lounge, private dining, library, cinema, and a golf driving range.

Construction of the AUD$500 million (USD$338 million) residential skyscraper is being completed in five stages from 2017 through 2019. 2018 saw the first residents move in, which is testimony to the high level of collaboration, coordination, and fire safety achieved on this project. In total, approximately 2,500 tonnes (2,755 tons) of glass, spanning 154,199 square meters (1,659,784 square feet), will be used to create the tower’s innovative facade.