Despite the Government of Colombia’s establishment of a legal framework to protect the rights of its Afro-Colombian and indigenous populations, ethnic minority populations continue to be among the most marginalized groups in the country. They suffer from exploitation, inequality, poverty, discrimination, social and economic insecurity, and violence. It is essential that national and local governments recognize all ethnic minority populations and have the capacity to successfully implement policies that protect the rights of such populations and support their participation in society and the economy.

I had the privilege of representing the ACDI/VOCA-Tetra Tech team at an official event in Cartagena this past Sunday in which Presidents Santos and Obama handed over recently-formalized collective land titles to the leaders of two Afro-Colombian communities—this represented the first time that collective land titles have been formalized in the coastal Caribbean region. Tetra Tech’s support through the USAID Afro-Colombian and Indigenous Program (ACIP) was instrumental to making this landmark accomplishment possible. Approximately 3,921 hectares of land is now legally and collectively held by the 14,679 beneficiaries in these two communities, enabling them to exercise their rights and authorities as the legal owners of this land.

To achieve these objectives, we are:

For Afro-Colombians and indigenous groups, the program is supporting implementation of priority policies: 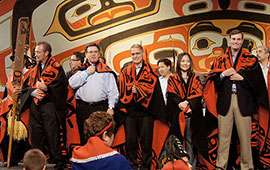