The tropical air hangs over the Sierra Leonean coastal village of Gbongboma like a moist towel. Musa Lahai sits in an enclave of thatched huts, surrounded by women and children sitting around two cooking fires. Orange flames lick the sides of several large kettles of fish stew. Each fish was hard to come by.

“Before, we were catching good fish. Now, we’re not,” Lahai says. He is deputy chief of the village, where approximately 90 people survive off earth’s bounties, from harvesting oysters, to deep sea fishing, to farming and growing palm fruit. These traditional livelihoods have lately become more difficult. Fishermen complain that the seas are being overfished by offshore trawlers. But there is another reason that fish are scarcer—the destruction of mangroves, which local people use for firewood, smoking fish, and construction.

An effort is underway in this fragile coastal landscape to save both people and mangroves, part of an initiative of the USAID-funded WA BiCC program.

Gbongboma is located on Sherbro Island in the Sherbro River Estuary, home to the greatest concentration of mangroves in Sierra Leone. Mangroves play a vital role in food security and in the local economy because they are a breeding ground for fish. The loss of mangroves reduces spawning grounds, leading to further depletion of fish. Because the trees grow near the water’s edge and have a dense, woody root system, they also protect against storm surges, coastal erosion and flooding, making them all the more important because communities of the Sherbro River Estuary are extremely vulnerable to the threats of the rising sea level.

During a meeting organized by WA BiCC, paramount chiefs and community leaders from around the coastal region gathered in the town of Bonthe to discuss strategies for restoring and protecting mangroves. “As a small boy, we used mangroves as wood and charcoal for cooking,” says Thomas Koroma, paramount chief of the Sittia chieftain. “Now we see the value of mangroves. We tell people if they continue to use it as the main source of firewood, it will cause disaster.”

Sitting in the shade of a hut, Lahai acknowledges that he and his neighbors have been cutting down mangroves for years. That began to change in early 2019 following workshops on mangrove restoration sponsored by WA BiCC. “We learned the importance of mangroves,” he says. “If we just cut it down, water will flood our village.”

In a mangrove swamp near the village, one can see that large sections of the trees have been cleared for fishing and firewood. But something else is happening here: small green mangrove shoots are poking through the dried mud. By mid-2019, Gbongboma residents had cultivated a mangrove nursery and replanted nearly 2 hectares of mangroves. If this pilot project can be scaled up, it could make a difference for the resilience of coastal communities.

It is a small inroad, but an important symbol that communities are working to adapt to their changing world. 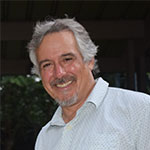 David Goodman is a journalist for national publications, the bestselling author of 11 books, and a sought-after freelance writer. For this and other WA BiCC blogs, he traveled extensively throughout West Africa to highlight the successes and challenges faced in combating wildlife trafficking, increasing coastal resilience to climate change, and reducing deforestation, forest degradation, and biodiversity loss.