Utilizing the Structure to Reduce Energy in Building Design 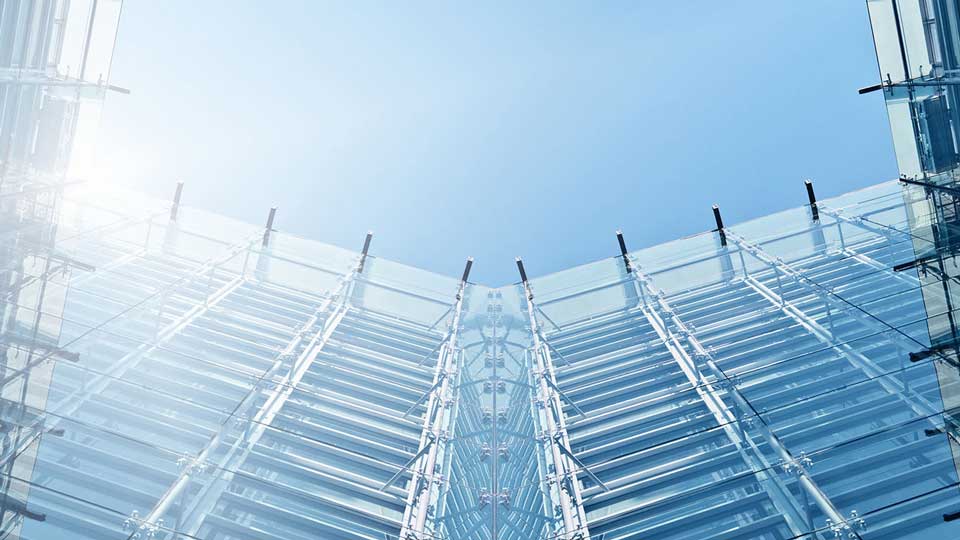 High-performance building design requires everyone be around the same table from day one, constantly evaluating the tradeoffs from one concept to another.

Energy efficiency continues to weave itself into the expectation of building design. Building trades, including mechanical, electrical, plumbing, and structural engineers, are having to modify their general practices. The new requirements of building codes, namely energy codes, are subsequently forcing age-old structural detailing into a new realm. Moreover, as designers seek to get the most bang for their buck in their building designs, the integration of structural design with mechanical, electrical, and plumbing infrastructure becomes paramount.

High-performance building design requires everyone be around the same table from day one, constantly evaluating the tradeoffs from one concept to another. This article discusses three of the most prominent relationships between structure and energy efficiency: structural type, application of rigid insulation, and the elimination or reduction of thermal bridging.

The first step in the design conversation involves the selection of structural materials. In most cases, this is a question of steel or concrete, although high performance building designs are driving other solutions as well, such as straw-bale construction, structurally insulated panels, phase-change materials, and polymer-based 3-D printing. Regardless of the structural material, the concerns associated with thermal massing, thermal breaks, and application of insulation remain the same. For example, a concrete structure has an inherently larger thermal mass capacity than steel-framed structures (because heat dissipates from steel faster than concrete). Thus, concrete can provide exceptional thermal comfort, reduced/delayed peak loads (Figure 1), and improved energy efficiency when applied properly. Of course, span length, seismic weight, commodity pricing, and other issues can override these concerns, which forces decisions regarding structural type. Design teams must consider their local climate to drive material selection. Milder climates, for example, tend to support low thermal mass, while more extreme climates tend to support (properly applied) high thermal mass. 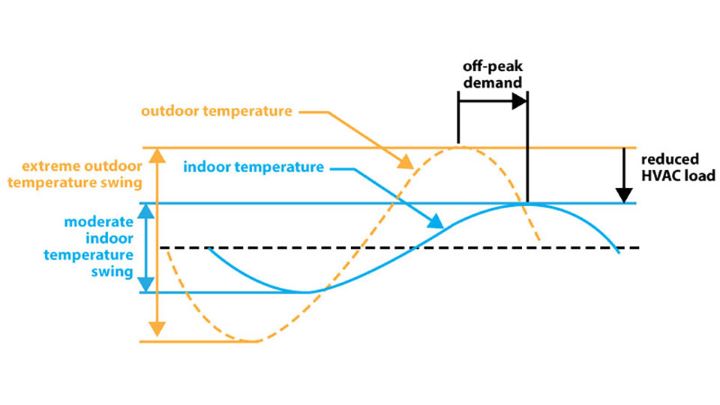 The default response is to add more insulation to drive down energy usage in buildings. The traditional application of fiberglass batt insulation becomes limiting because increased thermal resistance values (R-values) demand thicker walls. A point of diminishing return is reached quickly as usable floor area is decreased and wall thicknesses require significantly more structure to stand up. Theoretically, the silver bullet solution to this challenge is the application of rigid insulation. It has about twice as much R-value per inch as traditional batt insulation and can maintain a relatively similar thermal performance, regardless of the structure type, due to its theoretically continuous application that is not disrupted by structural members. On paper, this is easy to visualize, and the R-value numbers look great; however, the reality of its application in the field is not so straightforward. For example, the 2012 International Energy Code expects a (U-value) of 0.079 Btu/hr-ft² -°F as a prescriptive minimum for metal stud walls. With a 2×6 metal stud wall, this equates to approximately R-21 batt insulation between studs with 1.5 inches of rigid insulation applied to the exterior. Not only can this target U-value not be reasonably achieved in metal stud walls without the integration of rigid insulation, but the choice of exterior finish can have additional structural challenges. If plaster is applied as the exterior finish, then all is good. If brick is applied, then the face of the wall is upward of 5 to 6 inches away from the supporting studs, with the heaviest part, brick, at the furthest point (Figure 2). This conundrum either forces the designers to dramatically increase the structural elements—such as shelf angles and the detailing associated with this assembly—or select different materials and assemblies altogether. 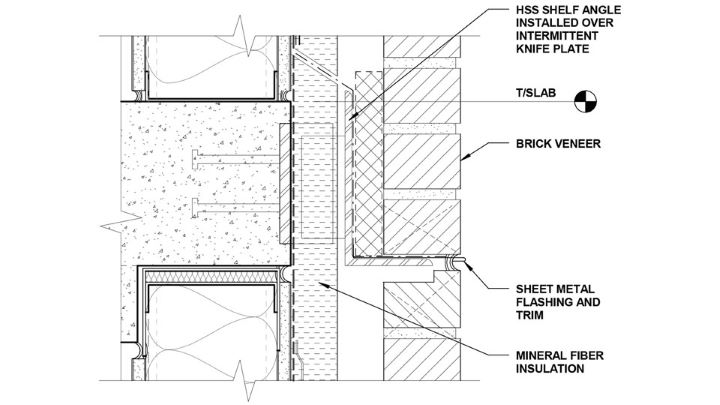 In addition to increased insulation values, appropriate attention to thermal bridging and the incorporation of thermal breaks are becoming important considerations. The objective is to eliminate or minimize all direct connections for heat transfer between the outside and the inside of the building structure. Although relatively small in area, the number of connection points is high across an entire building, which ultimately degrades the theoretical performance of the building envelope assembly in a big way. Imagine a metal screw or pin that holds the rigid insulation to the metal structure. This point is a direct pathway for the outside temperature to influence the inside temperature, which defeats the purpose of applying insulation in the first place. This phenomenon (Figure 3) is inherent in numerous envelope assemblies, such as metal-framed windows, rigid insulation applied to a metal stud, and concrete structures where floors and walls meet (to name a few). The challenge with these thermal pathways is that they de-rate the U-value of the overall assembly, which requires the application of more (or higher performance) materials/systems to offset this deficiency. In metal stud framing without continuous insulation, the performance of the wall can degrade upward of 50 percent from the prescribed insulation R-value due to thermal bridging of the studs passing through the batt insulation. For this reason, the 2016 California code now mandates (i.e., not allowed to circumvent with whole-building energy analysis) rigid insulation on metal-framed 2×6 stud walls. Furthermore, if not addressed appropriately, the impacts of thermal bridging can cause moisture problems within the assembly, which has a multitude of problems, such as mold, structural degradation, and more. Infiltration can be avoided when a tightly sealed continuous insulation layer is applied to walls. To avoid the pitfalls associated with thermal bridging, structural engineers must envision how the envelope and structural assembly come together in a way that maximizes the application of continuous insulation. 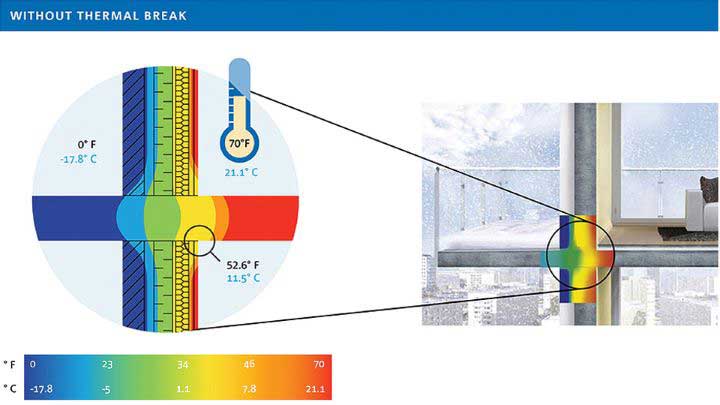 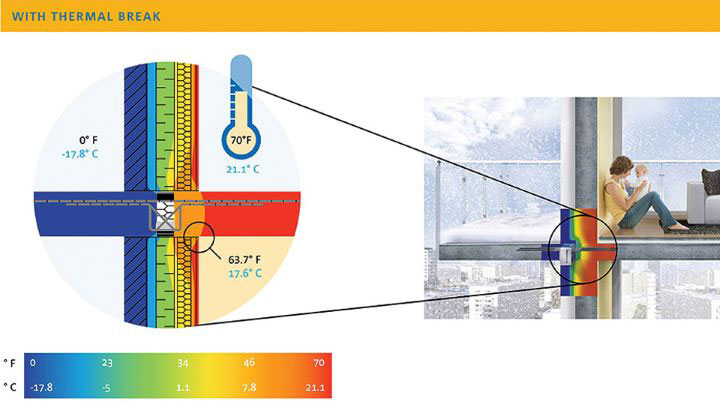 This evolution in the building industry requires unprecedented integration and coordination during the design process. All parties need to be engaged early in the project, and decisions cannot be made in a vacuum. Energy modeling from concept through completion is necessary to realize the high-performance expectations of the industry and codes. By asking the questions early on and modeling the energy and cost performance of multiple scenarios, the chances of delivering the product that the client envisions (and codes expect) becomes much more feasible.