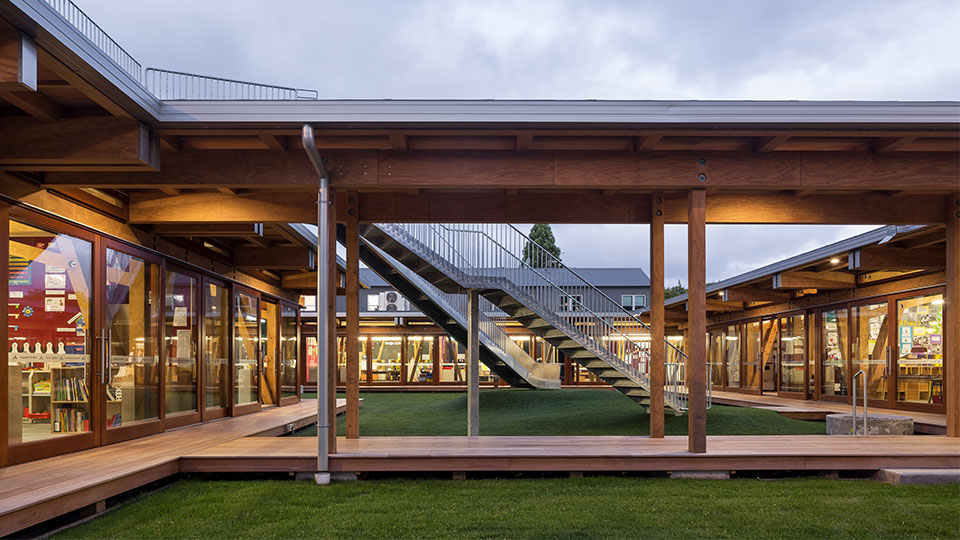 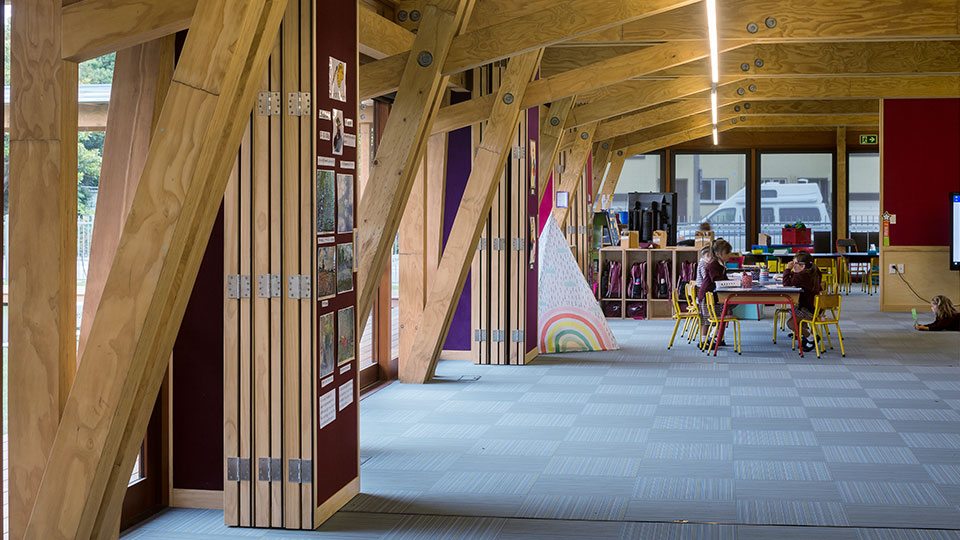 Architect Andrew Barrie, Professor at the University of Auckland’s School of Architecture & Planning, played a key role in creating the circumstances that ultimately led to this project. “I studied in New Zealand before I went and studied and worked in Japan, and I became good friends with Takaharu and Yui Tezuka. I’d done a bit of writing in some magazines on their projects,” says Barrie.

“I now teach at the university, and I arranged for them to come in as visiting professors. While they were here, Takaharu did a lecture in Christchurch, and it turned out that the principal of the school came along to the lecture. A few days later the Tezukas got an email from the principal, letting them know that they had an architectural competition going on, and asking if the Tezukas would be interested in submitting an entry. They then got in touch with me, asking if I’d do it in collaboration with them.”

“We won, beating out four other entries from very well-regarded architectural firms.”

The project presented several challenges from the very beginning. The design called for the use of a new material called Laminated Veneer Lumber (LVL): a product made by combining layers of wood with adhesive and compressing them together with heat and pressure. The end material is stronger than similarly sized timber and can be manufactured in greater sizes without the added cost found in timber slabs.

“We wanted to make a wooden building using natural materials,” says Barrie. “New Zealand has a long history of making interesting buildings out of wood, and we wanted to honor that. We chose LVL because it has lots of advantages over slab timber, such as stability. One of the key drawbacks of making things with wood is that it can warp or swell. LVL tends to remain stable, no matter what the conditions are. Approximately 90 percent of the completed building is timber.”

One of the challenges in using timber for all structural elements is creating strong joints, especially in an area prone to earthquakes.

“Typically, steel joints are used for large timber structures,” says Barrie. “But we wanted to use as much natural material as possible, so we used timber-to-timber joints,” adds Barrie. “This meant we had to have very accurate joints that were precisely cut out of the timber. Following a very careful modeling and drawing process, the column beams were milled by robotic computer-controlled milling machines. The pieces were manufactured in Auckland, and assembled in Christchurch like a giant construction set that all had to fit together perfectly. It’s the first time in NZ that this kind of jointing method has been employed at this scale.”

“LVL takes up more space than steel, and because the wood had to be thick enough to provide structural support for the roof, there were no internal cavity spaces. This meant that utility lines had to be run through on the LVL elements themselves. All modifications to the LVL had to be cleared with a structural engineer to ensure that it wouldn’t compromise the load-bearing capability of the structure. This was particularly important, as the roof incorporated a playground on top of the building.

“Despite this limitation, the end result looks spectacular and creates a unique space in the school.”

A Slide in the Sky

Tezuka Architects have created rooftop playgrounds previously, and it was a feature that the client was particularly excited about.

“We really wanted to incorporate this feature,” says Barrie. “It adds a visible playful element to soften the structure and improve the fun factor. It’s also a very efficient use of the available space. The children can play across the roof or the enclosed courtyard, and a big slide allows students to move between the spaces.”

“Typically, on projects like this, the architect and builder work together to ensure the building complies with the relevant codes and requirements," says Barrie. “However, the Japanese approach is that the architect creates the design, and it’s up to the builder to ensure that the building is up to spec, without modifying the design. As you can imagine, this can have interesting results. This is where I had to liaise between NZ and Japan, ensuring that the building met the relevant codes without compromising the design aesthetic.”

As with all projects, collaboration was a key element in creating a desirable outcome.

“The project came in on time and on budget, says Barrie. “For a long time, it looked like we wouldn’t make that, but we all pulled together across the project to make it happen.”

“Working with an architect that truly cared about the details meant that we had a lot of discussions, resulting in a fantastic result for everyone,” adds Knight. “Even the smallest detail was re-examined. For example, the louvres on the exhaust ports were functional, but Andrew wanted a more elegant finish, so custom louvres with the school logo were manufactured to add an additional level of detail to the exterior.”

For Barrie, the real highlight is the success with the staff, students and local community.

“The school is very pleased with the outcome, and the project has already won several awards. The school showed a lot of trust in the design team, allowing us to use new methods and materials, but the final outcome shows how worthwhile this was.”