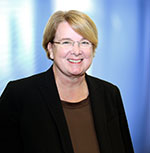 Ms. Maguire has been a member of our Board since November 2016. She served as Executive Vice President of Lockheed Martin Space Systems Company from July 2006 until her retirement in May 2013. Ms. Maguire joined Lockheed Martin in 2003. Prior to joining Lockheed Martin, she served in several technical leadership positions at TRW’s Space & Electronics sector, overseeing programs in engineering, advanced technology, manufacturing, and business development. She is a member of the U.S. National Academy of Engineering and the International Academy of Astronautics.  Ms. Maguire is a fellow of the American Institute of Aeronautics and Astronautics.  She holds a master’s degree in engineering from the University of California, Los Angeles. Ms. Maguire continues to sit on the boards of directors of CommScope, Visteon, and the Charles Stark Draper Laboratory.