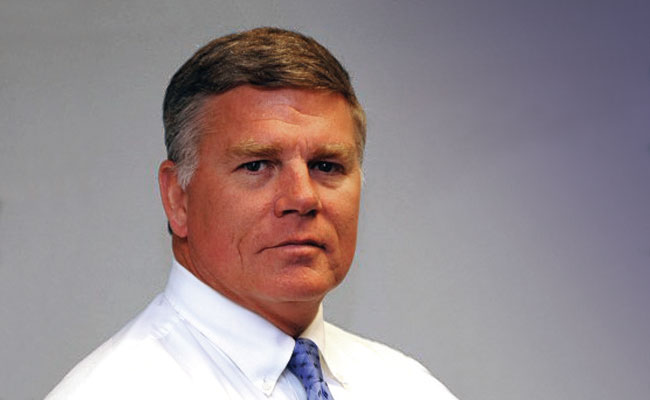 Leo Eldredge, PMP, has more than 30 years of aviation experience and currently serves as a vice president of Tetra Tech’s aerospace practice. He is a recognized industry expert who authored the original concept for the international Alternative Position, Navigation, and Timing (APNT) program and has presented more than 100 papers for the International Civil Aviation Organization (ICAO), U.S. Delegation. Prior to joining Tetra Tech, Mr. Eldredge held multiple management roles within the Federal Aviation Administration (FAA), including serving as the Acting Division Manager of NextGen Lifecycle Planning Division and the Portfolio Manager for Performance-Based Navigation (PBN).

Mr. Eldredge led the teams that developed and employed the first satellite- and ground-based augmentation systems. He currently applies his specialized technical expertise to support the FAA Navigation Programs and PBN Office by providing subject-matter expertise and strategic planning for NextGen initiatives.

Mr. Eldredge received the Norman P. Hayes Award from the U.S. Institute of Navigation, represented the FAA on several international committees, and served as the U.S. member to the ICAO Navigation Systems Panel. He earned his Master of Science degree in Computer Information Systems from Strayer University.

How did you first become involved in the aviation industry?

I started by serving 22 years in the U.S. Air Force. After attending year-long pilot training at Vance Air Force Base in Oklahoma, I subsequently was a T-38 Instructor Pilot. Later, I was assigned to the B-52G at Griffiss Air Force Base in New York as an aircraft commander, instructor, and evaluator pilot. My last assignment was at the USAF Instrument Flight Center at Randolph Air Force Base in Texas, where I first became involved in the Global Positioning System (GPS) program. I performed operational testing and developed procedures for use of GPS for aircraft navigation.

Compared to the conventional radio navigation systems, GPS was a game changer that could revolutionize how aircraft navigate the globe. I committed myself to following the GPS path to the Federal Aviation Administration (FAA) to support the transition of aircraft to satellite-based navigation. While at the FAA, I eventually assumed responsibility for development and implementation of all FAA satellite navigation systems, including development of the Wide Area Augmentation System (WAAS) and Ground Based Augmentation System (GBAS) technology and implementation of the technology in the U.S. National Airspace System (NAS). I also led the U.S. team developing standards for satellite navigation systems globally through the United Nations (UN) International Civil Aviation Organization (ICAO).

What is NextGen and how is Tetra Tech helping the FAA achieve their NextGen objectives?

NextGen is a strategic plan to modernize the U.S. NAS to enable more aircraft to fly direct routes to more airports with greater efficiency to support projected increased demand for air travel. To achieve those outcomes, NextGen depends on GPS-based navigation. The older, conventional radio navigation systems have reached their practical limit for supporting increased demand for air travel, so transitioning to satellite-based technology and performance-based navigation is necessary. To deliver the desired outcomes under NextGen, FAA also will need to modernize the communication, surveillance, and automation systems pilots and controllers use to ensure safe air traffic operations.

Tetra Tech leverages our knowledge and experience to support the FAA in modernizing the NAS and achieving NextGen goals including developing and implementing the PBN NAS Navigation Strategy, modernizing the satellite-based and ground-based navigation systems, and developing the instrument flight procedures aircraft fly throughout the NAS.

What are some of the current, important challenges facing the aviation industry?

Aviation, because of its critical safety of life requirements, tends to adopt new technology very slowly on an extended evolutionary process. Implementing new technology to safely deliver benefits is a significant challenge in the U.S. and internationally, due to the global nature of aircraft operations. Aircraft typically stay in service for 20-30 years. So although technology may advance quite rapidly, implementation of new technology into aircraft and air traffic management systems typically takes decades. New technology available for many aircraft cannot be used because the enabling infrastructure has not been put in place.

How is Tetra Tech uniquely positioned to support the FAA in overcoming those challenges?

Tetra Tech is at the forefront of implementing new navigation technology for the FAA.  We have supported the development and deployment of the WAAS and GBAS systems, and all the navigation charts aircraft use to fly highways in the sky—from takeoff to landing in low visibility conditions. Prior to joining Tetra Tech, members of our team developed the new concepts, designs, and implementation plans that have lead the transition to NextGen. Tetra Tech has the unique expertise to continue this transition for the U.S. government and international aviation authorities.

How does Tetra Tech's involvement in international aviation projects help the FAA sustain its global leadership?

Tetra Tech is using our expertise to share the FAA’s PBN best practices internationally by helping other countries adopt satellite- and performance-based navigation technology. We are currently developing an airspace concept for Latvia and have performed similar projects for Canada, Mexico, and other countries. We also assume a leadership role at the Civil Air Navigation Services Organisation to help other air navigation service providers adopt new technology to improve capacity and efficiency. Tetra Tech will follow the ICAO 17-step Airspace Concept process, which is identical to the FAA’s PBN implementation process.