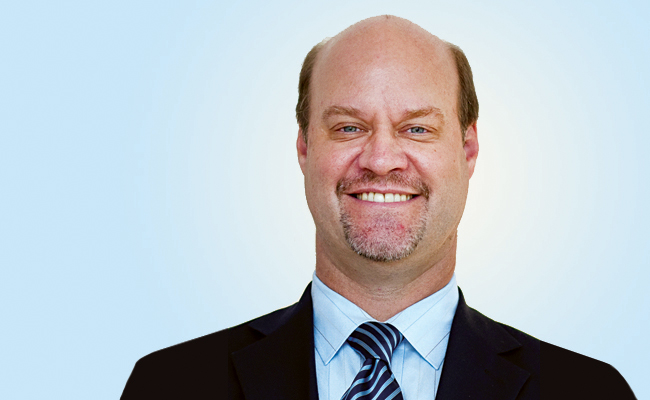 Mr. Meade’s experience includes projects in more than 30 countries in Africa, Asia, the Caribbean, Europe, Latin America, and the Middle East. He has worked with a variety of donor organizations including Asian Development Bank, European Union, Inter-American Development Bank, U.S. Agency for International Development (USAID), and The World Bank.

Mr. Meade began working in alternative energy after completing his Bachelor’s degree in energy and environmental management at Brown University. Prior to joining Tetra Tech, his experience included working on some of the United States’ early domestic policies for renewable energy.

You’ve worked on everything from sustainable tourism to renewable energy. How has your job evolved?

I started by creating a small renewable energy practice within the company and transitioned to working on environmental management projects primarily for the industrial sector.

Now, after 30 years, I am again focused on renewable energy and energy efficiency. I now work on programs, policy development, and project development as the Chief of Party for the USAID Indonesia Clean Energy Development (ICED) Project. Now in its second phase, ICED II has been instrumental in creating the wind power and solar energy market in Indonesia. Our greatest contribution is anticipating the technical and economic considerations of high penetrations of renewable energy on the national electricity system, and to offer advice based on the lessons learned from the United States and other countries that have already gone through similar transitions.

Why is clean energy development in Indonesia a priority at this time?

Indonesia is among the world’s largest emitters of greenhouse gases, and energy is the fastest growing source of emissions. So there’s no solution to global climate change without Indonesia. After being relatively isolated for many years, Indonesia now sees itself as exercising a leadership role in curbing carbon emissions and achieving energy independence.

Indonesia has an important and fragile ecosystem. They have some of the largest contiguous tropical rainforests and are struggling with deforestation issues. And since the country sits in the Ring of Fire, it is under threat from natural disasters. Additionally, the demand for electricity is growing by 7 to 10 percent per year. And nearly a quarter of Indonesia’s households still don’t have access to electricity.

Indonesia has announced very aggressive targets to reduce emissions by 26 percent by 2020—or 41 percent with foreign assistance.  Indonesia also has a national policy to achieve 23 percent of all primary energy and 25 percent of all new generating capacity from new and renewable energy sources. The United States has a bilateral trade and investment commitment to Indonesia, as well as a Congressional earmark for funding to be spent on global climate change. Norway and other countries have also committed significant funds.

Does clean energy development have other benefits for Indonesia?

Indonesia’s energy supply is dominated by fossil fuels. While the main population centers such as Java, Bali, and parts of Sumatra can benefit from large power plants, much of the country is made up of small islands and is very decentralized. These areas have been historically reliant on diesel, which means fuel has to be taken to small islands by barge. Recently rough seas prevented the shipping of fuel to Nias island off the south coast of Sumatra, and the whole island was without electricity for days. The distributed nature of Indonesia’s population also makes it increasingly expensive to reach what is called “the last mile” or the consumers farthest from the electricity generation sources.

The status quo is not working, so the national electric utility (PLN) has emerged as the principal partner with the ICED Project. We’re working with the national government, as well as regional and local authorities to meet energy needs at every level. The projects rely on indigenous sources such as hydropower, biomass, solar, wind, and biofuels.

We’ll also be working in areas that aren’t connected to the electricity grid, providing energy to small clinics, schools, and households in remote communities. In these cases, we’re not just reducing emissions, but also providing access to energy in areas that are un-served, most likely displacing charcoal and wood fuel.

Overall, ICED has the potential to help Indonesia become a leader in this field, which means increased economic opportunities.

What is the biggest challenge on the project?

Relative to countries that have had successful programs, Indonesia has not progressed past the policy stage to implementation and coordination in program administration. Our focus at the programmatic level is on bringing in the real elements to make the program happen and on creating the market in a systematic way. Indonesia is poised for success, but it needs to progress in a strategic way. For example, climate change and energy diversification targets are set without a clear plan for how to achieve them.

The biggest challenge is that the ICED results are tied to the development of commercial projects.  While Indonesia has enormous potential in renewable resources and investors and banks are eager to finance projects, the Government of Indonesia has not established sufficient incentives, such as the purchase price for electricity from renewable energy projects. Currently, ICED is assisting more than 150 projects with a combined generating capacity of nearly 1,800 megawatts. This represents a combined investment of more than $3 billion.  However, many of the projects are stalled waiting for higher feed-in tariffs and the realization of government fiscal incentives.

How is this project representative of Tetra Tech’s energy expertise in developing countries?

Tetra Tech offers our clients real solutions to their energy security needs and commitments for reducing greenhouse gas emissions. Rather than just doing policy, we have the ability to take a project all the way through financing, construction, and operations. We’re uniquely positioned to work on the entire project life cycle. It is an exciting time to be working in this field and for Tetra Tech to be shaping the market.