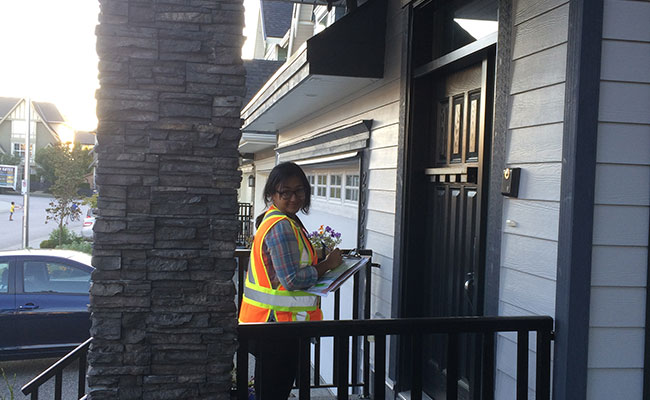 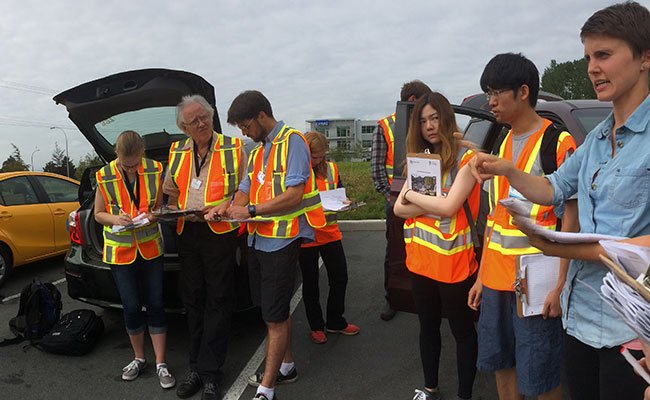 Melissa Nielsen, a project engineer for Tetra Tech’s Solid Waste Management Practice in Vancouver, Canada, discusses the roll-out of a food scraps collection program in British Columbia, Canada, and the resulting trash reduction and shift in community attitudes. Tetra Tech was engaged to perform a solid waste system assessment; provide strategy, design, and implementation support for an every-other-week trash collection pilot; and perform a door-to-door outreach for a municipality-wide food scraps collection program roll-out. All opinions expressed in this post are the author’s own.

Times were changing in Metro Vancouver in 2015 and 2016. New policies in the regional district of 2.5 million residents in British Columbia, Canada, meant that organic materials such food scraps and yard waste could no longer be disposed of with the trash. Municipalities hustled to roll out food scraps programs to provide their residents with collection services.

The Township of Langley (Township), a mid-size municipality in the Metro Vancouver region, had implemented a food scraps collection program in 2011 but wanted to increase participation rates to meet the region’s waste diversion target. A patchwork of urban and rural communities with a population of 117,000, the Township provides trash, recycling, and organics collection to suburban and many rural properties; the most rural properties receive recycling collection only.

Tetra Tech’s team was critical to the success of the Township’s detailed residential waste collection review—from system analysis through field pilot and implementation. They had an interdisciplinary approach that incorporated detailed technical analysis and financial modeling, effective meeting facilitation with key stakeholders, and a well-executed field study that produced accurate results. Tetra Tech staff worked diligently to respond to our needs as they evolved over the course of the project and exceeded our expectations by completing a thorough and succinct report.

They asked themselves how they could increase their diversion rates to be in line with Metro Vancouver's goals of 80 percent diversion by 2020. The answer: change the system. So, then, how to get people accustomed to the new system? Behavior change—that is the hard (and important) part.

In neighboring jurisdictions and across North America, one shift had proven to be highly effective: switch trash collection from weekly to every-other-week, while keeping organics and recycling collection weekly. When programs shifted to every-other-week trash collection, the quantity of trash disposed dropped dramatically—40 percent by weight! As with any major program change, some fine tuning is to be expected, so the Township implemented a small-scale pilot with 270 homes. Our team compiled resident feedback and behavior change results for program optimization before the municipality-wide roll-out.

During the pilot, Tetra Tech staff engaged residents using a door-to-door campaign that included delivering how-to guides and scheduling information, and easing residents' fears about food scraps collection. Our well-trained staff effectively assured residents that separating their food scraps into the green organics bin along with yard trimmings wouldn't be any "yuckier" than depositing them in their black trash bin.

The pilot's outcomes were overwhelmingly positive. A survey Tetra Tech conducted found that:

The major takeaway? Changing to every-other-week trash in the entire municipality could result in diversion rates of 68 percent, resulting in an enormous reduction of food scraps being landfilled and preventing up to 2,800 tons of greenhouse gases from being released annually. This is due to the significant reduction of methane emissions by composting instead of landfilling food scraps.

The Township wanted the same results across the municipality as had been achieved in the pilot and decided to use the same methodology for the broad scale rollout. That meant face-to-face engagement with residents in almost 23,000 homes—a daunting task that Tetra Tech staff tackled with detailed planning and an efficient approach.

To knock on 23,000 doors, we hired more than 20 field staff, mostly consisting of environmentally conscious, friendly, fresh university graduates who were keen to spend their summer talking about compost. Staff were armed with kitchen pails and brochures and clad in high-visibility vests. They took to the streets in August of 2016 and in 8 weeks had reached 75 percent of residents within Township households.

The staff returned with plenty of anecdotes that were heartwarming for a waste nerd like me. For example, initial complaints about high taxes turned into promises to use the new system, and concerns about pests were alleviated as residents realized that they were just putting the same materials in different bins. Residents came to understand that having their trash collected every-other-week was going to be quite manageable, as their fellow residents also had realized during the pilot.

The best part? In the two years that have passed, the program has continued to be successful. Trash quantities are still nearly 40 percent lower than they were prior to program changes, and the Township's diversion rates have held steady at 70 percent. 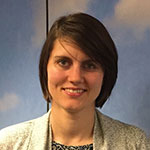 Melissa Nielsen is a project engineer with Tetra Tech’s Solid Waste Management Practice in Vancouver, British Columbia. Her multi-disciplinary background, which includes a Bachelor of Engineering in Environmental Engineering and work with a local government on rural water supply in Malawi, gives her a unique ability to combine technical waste management solutions with a community engagement component. Ms. Nielsen specializes in data collection and analysis for the efficient implementation and progress tracking of residential waste collection programs. She coordinated the field work and data tracking for a 23,000-home organics collection program in the Township of Langley, British Columbia. Most recently, she developed a methodology and implemented a data collection program to assess the effectiveness of multi-family waste collection programs in Metro Vancouver.