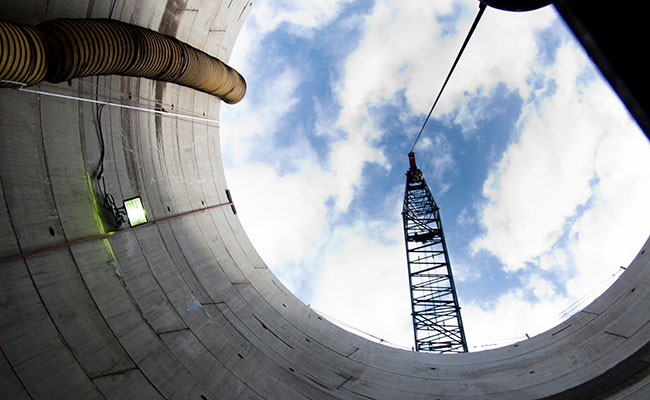 The American Council of Engineering Companies (ACEC) of Washington selected Tetra Tech for two awards at the 2015 Engineering Excellence Awards. Tetra Tech won the Best in State: Gold Award for Original or Innovative Application of New or Existing Techniques for our work on the Ballard Siphon Replacement Project, and a Best in State: Silver Award for Future Value to the Engineering Profession for our Kirkland Pump Station upgrade. The ceremony was held on January 23, 2015, in Bellevue, Washington.

Best in State: Gold Award for Original or Innovative Application of New or Existing Techniques

The project included evaluating the structural integrity of the wastewater system’s historic wooden pipelines, created in 1935, that run beneath the Lake Washington Ship Canal. In addition, the project used new technology, the Herrenknecht AG vertical shaft machine, to construct the tunnel portal for an 84-inch siphon running parallel to the original pipeline. The new pipeline increases the wastewater system capacity from 60 to 83 million gallons per day. This was the first project in North America to use this robotically controlled tunneling machine. The machine operates within a small construction footprint, in mixed and difficult soil conditions, and without the need for dewatering.

Read the article in the Daily Journal of Commerce.

Best in State: Silver Award for Future Value to the Engineering Profession

The new pump station required an upgrade that increased the system’s capacity from 5.6 to 9.4 million gallons per day. Tetra Tech’s design incorporated the existing pump station structure and expanding the infrastructure to house additional pumps and generator equipment. The design allowed the existing facility to remain in operation throughout construction. Tetra Tech was able to meet all of King County’s upgrade requirements in the limited available space, while mitigating noise and odor. Since the pump station was adjacent to a new light rail station also under construction, the contracts were phased to avoid conflicts and a joint outreach campaign kept the public and nearby businesses informed of all activities.