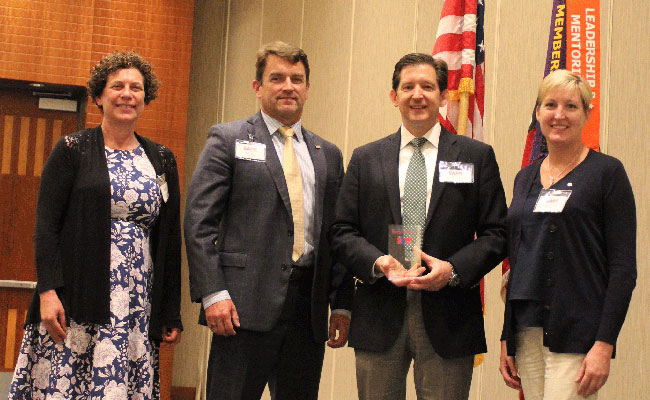 Tetra Tech achieved this recognition through its efforts during the past year, including taking on leadership roles at the SAME Hampton Roads Post, supporting mentoring programs, participating in national and regional SAME events, and being involved in community service activities. Tetra Tech’s Capt. Eric Aaby, CEC, USN (Ret.) serves as Treasurer of the Hampton Roads Post, and Louise Slate serves as Programs Chair.

Small businesses are an integral focus in contracting in the U.S. federal market. Tetra Tech continued its commitment to mentoring small businesses by hosting a matchmaking table during the SAME Hampton Roads Small Business Outreach and Industry Day in March 2019 and holding one-on-one meetings at the SAME Federal Small Business Conference in October 2018.

As part of its community service efforts, Tetra Tech organized a benefit to collect donations for the United Service Organizations (USO) to support the 5,000 veterans traveling through Norfolk International Airport during the holiday season. Tetra Tech also donated food to the Foodbank of Southeastern Virginia and the Eastern Shore; donated toys to Toys for Tots; and sent care packages to Task Force Panther, stationed in Afghanistan, to share joy with those who are not home with their loved ones during the holidays.

“I have been involved with the Hampton Roads Post for years and always enjoyed working with the great professionals on the Post Board as well as the members,” said Eric Aaby. “As a Post, we’ve been able to do many great things for our industry, our community, and our members. As the Treasurer this year, I enjoyed distributing the $30,000 in scholarships we provided for many students pursuing Science, Technology, Engineering, and Mathematics (STEM)-related education.”

Tetra Tech is honored to receive this recognition for its continued support of the SAME Hampton Roads Post.