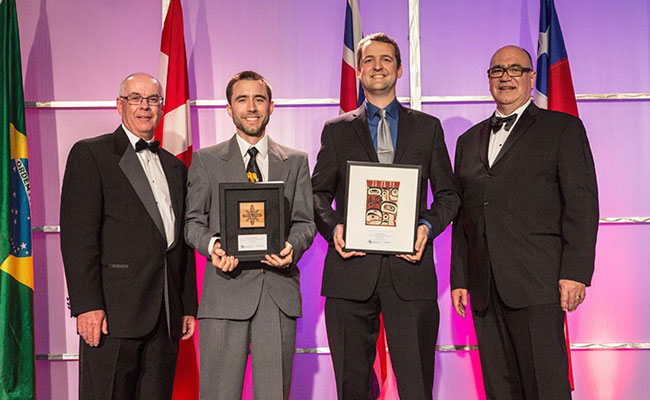 The Association of Consulting Engineering Companies British Columbia (ACEC-BC) presented Tetra Tech’s water and marine group from Vancouver, Canada, with the Award of Merit in the Soft Engineering category at the 2016 Awards for Engineering Excellence Gala on April 9, 2016. Tetra Tech received the honor for its Quesnel Lake Observations and Modeling Project. These annual awards recognize innovation in engineering and technical excellence.

In August 2014, the Mounty Polley Mine turned to Tetra Tech for assistance after the mine’s tailings storage facility failed, releasing particulate material into the Quesnel Lake in British Columbia. Tetra Tech provided limnology expertise to Mount Polley staff and consultants and assisted with locating deposited and suspended materials. Our staff conducted geophysical surveys and measured the bathymetry of the lake’s west basin area. They found a small amount of fine material suspended in a layer of cloudy water, some of which sank over a span of a few months. Geophysical and other land surveys, water level gauges, and the lake’s historical surroundings allowed Tetra Tech engineers to use a three-dimensional lake model to predict turbidity levels and where cloudy water would surface in the Quesnel River.

Tetra Tech’s sophisticated surveying equipment approach and comprehensive, innovative three-dimensional lake model allowed our scientists and engineers to provide an accurate time frame of when the lake would return to clarity.

Congratulations to the employees who used their expertise to make this project a success.