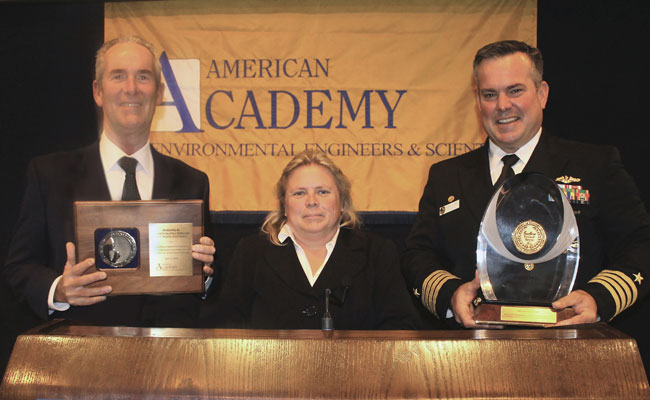 The American Academy of Environmental Engineers and Scientists (AAEES) recognized U.S. Navy Region Southwest for its cleanup project at Naval Base Point Loma in San Diego, California. Tetra Tech is proud to have supported the Navy in the rapid cleanup of volatile organic compound (VOC) contamination at the base, protecting human health and the environment.

The Navy, Tetra Tech, and other consultants collaborated to develop a state-of-the-art, accelerated approach to clean up contamination found in groundwater, soil gas, and indoor air at the base, posing a risk to personnel. Solvents stored at the site from its historic use as an aircraft manufacturing facility were established as the origin of the VOC contamination.

Remedial actions included installing a soil vapor extraction system for soil gas, enhanced anaerobic biomediation system for groundwater, and vapor intrusion mitigation measures for indoor air. While designing and implementing the remediation system, the Navy and its contractors had to work quickly to reduce contamination to minimize disruption to Navy operations. The team had to ensure potential migration pathways were sealed off and install the system in constrained areas with extensive utilities.

Tetra Tech supported the Navy by providing the best solution to ensure the system reduced contamination efficiently and rapidly. Since the remediation systems began operating in April 2015, groundwater and soil gas VOC concentrations were reduced below U.S. Environmental Protection Agency action levels. All workers have been able to reoccupy vacated offices. Our team continues to monitor groundwater, soil gas, and indoor air quality at the site.

Congratulations to the Navy, our team, and all the contributors who created a successful resolution to a complex, time-sensitive challenge.