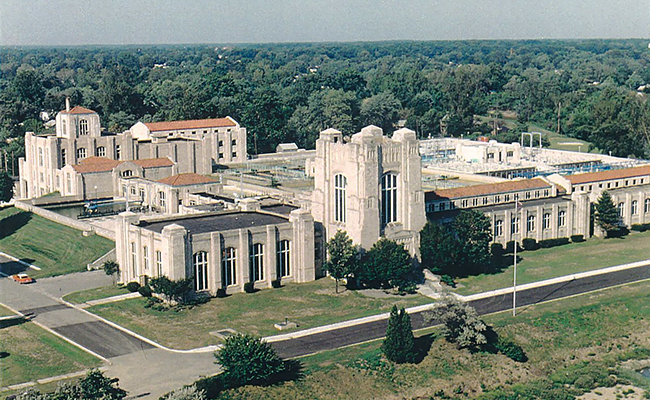 In 1914, the Panama Canal opened, Henry Ford announced the eight-hour workday, Babe Ruth debuted with the Boston Red Sox—and two young University of Michigan professors, William Hoad and Arthur Decker, founded a consulting engineering firm in Ann Arbor, Michigan, as an outlet for their expertise in water treatment. This fledging firm would eventually join Tetra Tech and in 2014 achieves the milestone of providing 100 years of continuous service in water management.

Water-borne diseases such as dysentery, typhoid fever, and cholera had been serious threats to the public’s drinking water supply during the 19th and early 20th Centuries. Hoad and Decker began operations with a new solution to this persistent public health problem: water filtration and disinfection using chlorine. Its work expanded to sewerage treatment, flood control, and additional civil infrastructure throughout Michigan and other Great Lakes states.

Several projects received much notoriety, including the first Sewage Disposal Plant in Grand Rapids, Michigan, in 1915; the Oakland County, Michigan, Sewage Disposal Works in 1926; and the City Reservoir and the Water Purification Plant for Fort Wayne, Indiana, in 1933. The Saginaw, Michigan, Water Works purification plant in 1928 was described then as “one of the most outstanding plants in the United States and Canada.”

The firm built on its reputation for excellence in the ensuing decades as its practice grew in the United States. Industrial clients eventually included the Big Three automotive manufacturers, Dow, Pfizer, and food manufacturers. In the early 1950s, Hoad and Decker evolved into McNamee, Porter & Seeley and was known as a preeminent wastewater engineering firm. In 1998 the firm joined Tetra Tech.

“Our clients included more than 200 cities and many industries,” says Tetra Tech’s Dr. Joh Kang. “Our professional services have enhanced the quality of life for all citizens, helped develop economic prosperity, and improved the environment we live in.”

“Now, as then, we continue to earn the trust of our clients and consistently position ourselves as leaders and innovators in all of our practice areas,” Dr. Kang says.

In Michigan, Tetra Tech is upgrading Oakland County’s SCADA system with state-of-the-art technologies. The new system collects data on water and wastewater operations from more than 275 locations with Human Machine Interface screens specifically designed by Tetra Tech. It communicates through a redundant network of high-speed radios and fiber optics and provides the county a new management tool for safe and reliable operations.

In Milwaukee, Wisconsin, the office worked with other Tetra Tech operating units to develop a comprehensive watershed-based master plan, which the Milwaukee Metropolitan Sewerage District adopted in 2007. Experts from across Tetra Tech were brought in and used state-of-the-art water quality models to identify the most cost-effective and sustainable alternatives for the master plan.

As part of global Tetra Tech, the offices in this region provide professional services to a broad range of clients on many continents.

“We are proud to be tied to the water history in this region and thank our loyal clients for continued engagement over this long period, which has made us one of the best in the business,” says Mark Rynning, executive vice president of Tetra Tech’s water infrastructure group. “We look forward to new opportunities for our clients and associates in the coming decades.”