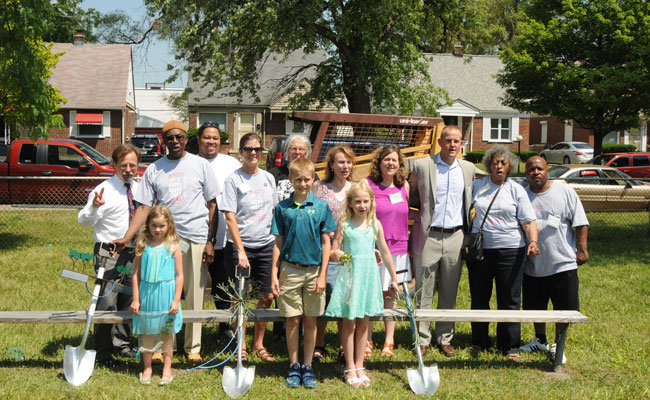 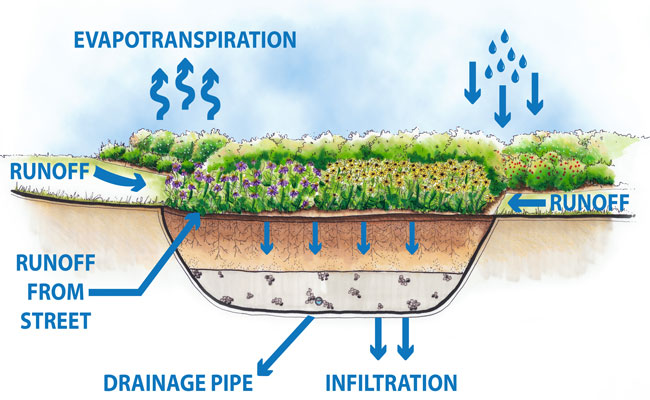 Project update: Construction of the stormwater management system using bioretention gardens to treat and infiltrate runoff from streets and sidewalks has been completed at Viola Liuzzo Park, and construction of the park revitalization elements—including a new playground, walking paths, and a pickleball court—is nearing completion. The park will soon be open to the public following a ribbon cutting ceremony later in 2017. In January 2017, Climate Change Business Journal recognized Tetra Tech’s green infrastructure work at Viola Liuzzo Park in Detroit, Michigan, as among the most outstanding projects of 2016.

On July 12, 2016, the City of Detroit and Viola Liuzzo Park Association (VLPA) led a groundbreaking celebration for a revitalized park that will include stormwater management features Tetra Tech designed on behalf of the Detroit Water and Sewerage Department (DWSD). As part of Tetra Tech’s support to DWSD’s Green Infrastructure Program, Tetra Tech designed three bioretention areas—sometimes referred to as rain gardens—for Viola Liuzzo Park. The bioretention features will treat and infiltrate stormwater from streets and sidewalks, while providing landscaping that aligns with the community’s vision for the park.

In 1982 the City of Detroit dedicated the park to the memory of Viola Liuzzo, a Detroit civil rights activist who was killed in Alabama after the Selma-to-Montgomery march in 1965. When the park fell into disrepair, residents formed the VLPA to revitalize the park and create a fun, safe space for local families. Tetra Tech recognized the opportunity to incorporate green infrastructure into the park’s redesign and worked with VLPA, DWSD, and the Detroit Parks & Recreation Department to integrate the bioretention areas.

Tetra Tech helped plan and coordinate the ceremony, including working with the Detroit Food Academy and the Motor City Popcorn Company to provide local snacks and coordinating a tree giveaway with the Wayne County Conservation District so residents could take home trees to plant. Tetra Tech also commissioned a Detroit artist to create three art shovels representing green infrastructure for use in the ceremony and future green infrastructure project groundbreakings in Detroit.

Park improvements will be completed by late October 2016. Tetra Tech will work with DWSD and the VLPA members to create educational signage for the bioretention areas. When the park transformation is ready to share with the community, Tetra Tech, working with the City of Detroit, will help host a ribbon cutting celebration that includes an educational component explaining how the bioretention gardens work and how local residents can volunteer to help maintain them.

The goal of DWSD’s Green Infrastructure Program is to reduce the volume of stormwater entering Detroit’s combined sewer system through onsite stormwater management that mimics natural processes of soil and vegetation, reducing the need for costly wastewater treatment while beautifying local neighborhoods. The new Viola Liuzzo Park will honor Detroit’s past and reflect the city’s future as a leader in green infrastructure.