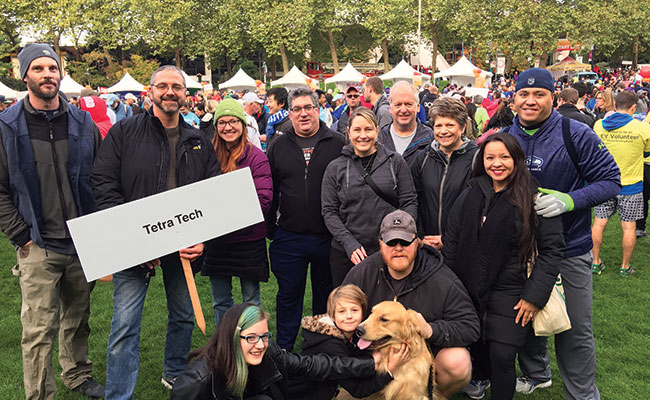 Tetra Tech’s touching tribute to a deceased employee whose life was cut short by heart disease demonstrates the commitment of employees across the company to giving back to their communities. On February 26, 2017, heart disease unexpectedly took the life of John B. Loflin, assistant controller at one of Tetra Tech’s U.S.-based operations. In response to the devastating loss of their coworker, staff resolved to devote their energy to supporting the work of the American Heart Association (AHA), raising more than $26,000. Employees from offices across the United States participated in fundraising events and raising awareness of heart disease. The group received Tetra Tech’s 2017 Excellence & Achievement Award for Community Service.

“John Loflin was a valued Tetra Tech employee for 17 years, a dedicated family man, and a friend to many,” said Jonathan Weiss, who leads the consulting and engineering group where John Loflin worked. “His unexpected passing at such a young age was a shock and left us feeling that we should do something to help prevent other families from having to endure the pain and suffering of the Loflin family.

“We chose to conduct a fundraiser with all funds going to the AHA, the nation’s largest and oldest volunteer organization dedicated to fighting heart disease, to help fulfill its mission of saving lives,” Jonathan said. Although heart disease is largely preventable, it is the leading cause of death in both men and women globally. Approximately one in every three adults around the world is affected by some form of cardiovascular disease, in which blocked or narrowed blood vessels can lead to heart attack or stroke. Our efforts will help the AHA fight heart disease by supporting research funding, stronger public health policies, and critical tools and information to save and improve lives. AHA-funded research has resulted in several lifesaving advances such as the first artificial heart valve, cholesterol-lowering drugs, heart transplants, and CPR techniques.

Team captains Nathalie Schils and Leslie Gordon organized their operation into 11 teams, each with an office captain, to work together and share ideas on successful fundraising ideas. Events included gym classes, socials, guessing jars, and raffles. Employees from across the operation came together for salad bars, barbecues, and breakfasts to show solidarity in support of heart disease prevention and to honor their former colleague. Representatives from many offices across the country joined their cities’ AHA Heart Walks to promote health and wellness, coming together to show support for fighting heart disease.

The Oak Ridge Quack Attack Team from Tennessee raised more than $9,000 to beat out all other Tetra Tech teams. They also were a top-three fundraiser for the Knoxville Heart Walk. Seven other offices raised more than $1,000 each. The fundraising efforts created camaraderie and friendly competition between offices, as well as a touching tribute to a former colleague and friend.

We are hopeful that our efforts will continue to contribute to disease prevention and education so other families can be spared the tragic loss suffered by John Loflin’s family. We thank our employees for their example of honoring their colleague’s memory by making a difference through their dedicated fundraising and outreach support of the AHA.