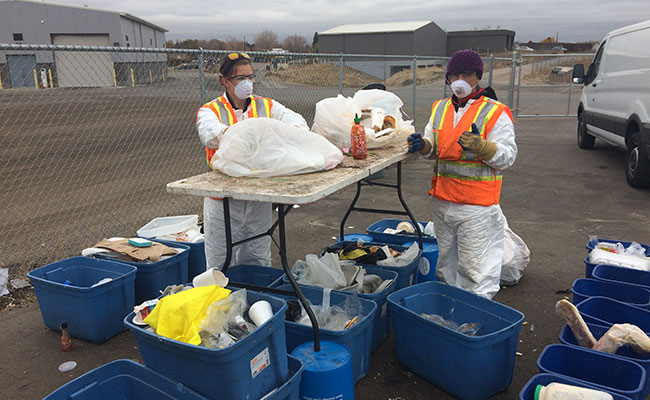 Tetra Tech collected and analyzed data for a recent Natural Resources Defense Council (NRDC) report analyzing food waste trends in urban areas of the United States to identify ways to reduce the amount of food that ends up in landfills.

Tetra Tech offers methods to measure and probe the global problem of food waste, which amounts to more than 1 billion tons annually worldwide and generates millions of tons of greenhouse gases, according to the United Nations Food and Agriculture Organization. In the United States alone, the value of food wasted annually is estimated at $218 billion, with most waste occurring among consumers, restaurants, grocery stores, and institutional food service entities. Our team recently conducted a food waste characterization project in partnership with the NRDC, collecting information and data that will be used to help meet the U.S. Environmental Protection Agency’s 50-percent national reduction goal to be achieved by 2030.

Tetra Tech provided a diagnostic analysis of the composition of food waste, using existing research and qualitative information to fill knowledge gaps and develop studies that further probed what was happening at the bottom of the bin. Our field research for the NRDC project found how the science of dumpster diving can shed light on why people throw food away. The project engaged selected representative households in Denver, Nashville, and New York to track what they threw out and why. Participant diaries, which included behavioral information, were supplemented by surveys and targeted bin digs. The research team took samples from participants’ waste containers to verify self-reporting in waste diaries. The team also recruited businesses in the three cities to agree to turn over the contents of their waste bins for examination and complete surveys on how their staff manages food waste.

Building on Tetra Tech’s experience studying food waste in western Canada, this is the first time this type of direct data collection had been done in the United States to link actual behavior with reported behavior and is a crucial step in developing actionable results. The studies enabled our team to make scientific inferences about why food was thrown out. The research helped to characterize existing food waste streams and associated behavior patterns linked to food waste. This type of research can lead to better methods to reduce waste at the source, improvements to food rescue and recovery, more efficient composting, and separation of waste processing for various types of food.

Tetra Tech’s findings were recently published in the October 2017 NRDC report Estimating Quantities and Types of Food Waste at the City Level. This report highlights the role cities can play in identifying how food is going to waste as a critical first step toward decreasing waste. In addition to providing local insights in each place, the reports identify patterns that emerged across the three cities that suggest how these problems and opportunities could be tackled at a city level nationwide.