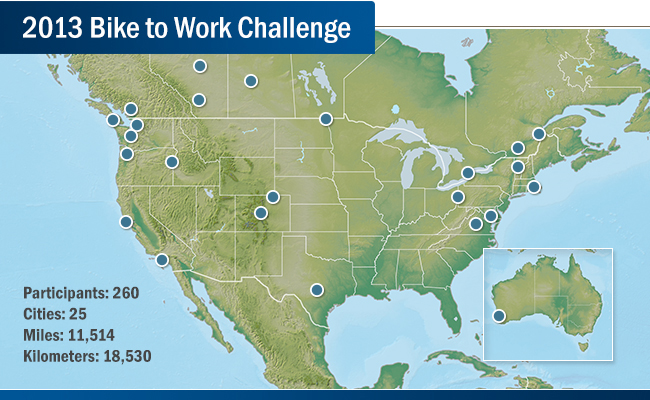 A group of these employees spearheaded Tetra Tech’s first employee Bike to Work Week Challenge (BTWW) in May 2013. Read on to learn more about their efforts and the success of this event.

What began as a friendly challenge between two offices morphed into a companywide competition for a cool trophy and bragging rights. Our Seattle, Washington office challenged our Richmond (Vancouver-area), British Columbia, office suggesting they could break the Vancouver’s impressive 2012 BTWW distance total.

The Vancouver office took that challenge and ran—or rather, biked—with it, issuing a companywide challenge. Any bike team who could rack up more miles and trips than the Vancouver team during a one week period would win Vancouver’s custom-designed Tetra Tech Bike to Work trophy.

The response was more than anyone expected, as word of the event spread through the company. The total climbed to 23 teams representing 25 cities. Only a third of the teams had already planned to participate in a local BTWW event in May. The others formed specifically for the Tetra Tech event.

“I was thrilled every time a new team registered,” says Tetra Tech’s Harveen Aujla, who volunteered to organize the competition. “I had hoped to have five or six teams participate in our first event.”

In total, Tetra Tech employees logged 11,514 miles (18,530 kilometers) on their bikes. Our Denver-area team took home the trophy, getting the highest percentage of employees to participate.

The best report from the BTWW Challenge? Two employees in Saskatoon rode a tandem bicycle to work every day for a week. Now that’s the Tetra Tech spirit of collaboration!

We congratulate our employees on this amazing first foray into sustainable commuting.