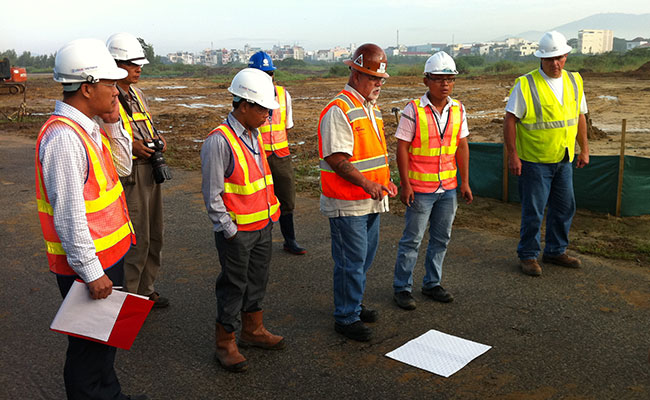 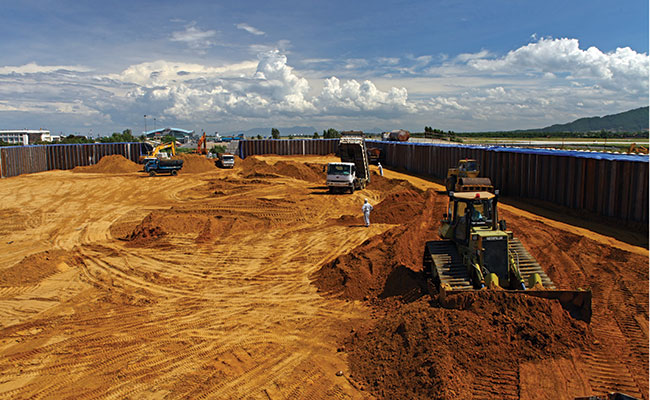 Tetra Tech joins the National Safety Council in recognizing June as Safety Month. We commend the team of employees and subcontractors working on a remediation project at Vietnam’s Da Nang International Airport for their commitment to maintaining a safe project site in challenging conditions. The project won Tetra Tech’s 2014 Excellence & Achievement Award for Safety, which is the company’s highest level of recognition for safety performance.

Under contract with the U.S. Agency for International Development, Tetra Tech is supporting the first U.S.-funded remediation of environmental contamination resulting from herbicides and defoliants used during the Vietnam War. Tetra Tech’s team is constructing a treatment compound and excavating more than 80,000 cubic meters of dioxin-contaminated soil at the Da Nang International Airport.

Before addressing the project’s technical challenges, Tetra Tech’s team, with support from the client and its construction management contractor, developed a plan for dealing with numerous health and safety (H&S) demands associated with the project.

The prior safety knowledge and training of the local Vietnamese subcontractors were two major obstacles for the Tetra Tech team. Many workers had little or no knowledge of safe work practices on construction sites contaminated with hazardous chemical constituents, including dioxins, arsenic, and chlorinated solvents, and unexploded ordnance (UXO). The subcontractors also lacked worker protection and medical surveillance programs, as well as UXO safety procedures. Many had misconceptions about the impacts of environmental contaminants on human health.

The site location also proved challenging, with work being performed at an active airport and less than 100 feet from residential neighborhoods. The contaminated areas included upland areas as well as a lake and wetlands with poisonous snakes, centipedes, and hornets.

The project team developed and implemented a 16-hour Construction and Hazardous Waste Operations and Emergency Response (HAZWOPER) Safety Training Course, along with eight-hour Annual Refresher Training. Personnel are required to attend the HAZWOPER training course and display proficiency in safety awareness and communication.

In addition to the required courses, the team conducts both daily H&S meetings before the start of each workday and weekly inspections. Medical surveillance of personnel for exposure to dioxin is among the project’s many ongoing precautions. Despite an aggressive schedule and a hazardous work environment, Tetra Tech’s team achieved a record of zero lost workdays and more than 150,000 injury-free work hours.

“Everyone working on the project now has a great attitude regarding safety,” said Walt Edwards, site H&S officer. “With the support of the subcontractors’ supervisors and health and safety team, this makes for a safe and enjoyable project.”

“The emphasis on occupational health and safety as a safeguard to the well-being of the workers and their families has been successfully transformed into daily practices and will continue to have positive effects during this project and their future work,” said Liu. “I am proud to be part of the team that provides a positive impact on this important project.”