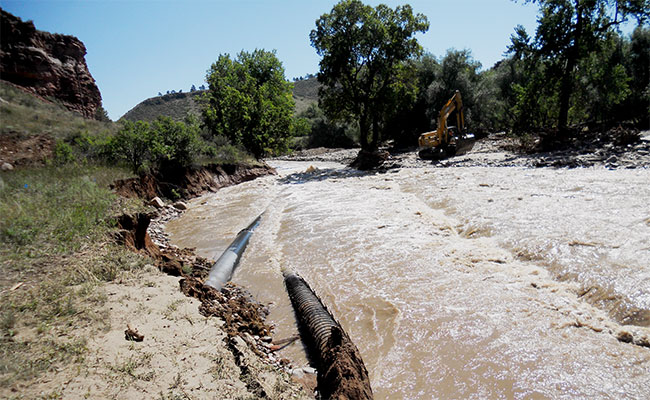 Stories of the selfless contributions of people during and after an environmental calamity are the silver lining amidst a human catastrophe. Hurricanes in the Gulf of Mexico, earthquakes in California, and tsunamis in the South Pacific have brought forth the best in those motivated by nothing more than their sense of community well-being and simple goodwill. 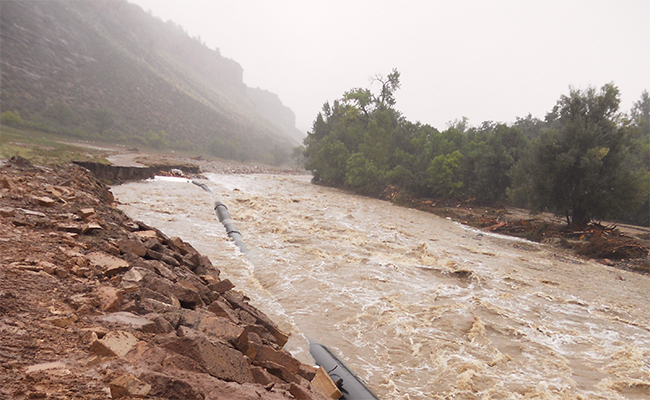 Recent torrential rainfall precipitated a major flood at the Big Thompson River on September 13, 2013, in Loveland, CO, between Longmont and Fort Collins. Dan Evans, a water resources engineer in our Fort Collins office, contacted a friend and former co-worker who works for the City of Loveland. Evans volunteered whatever he and Tetra Tech could provide with the city’s compromised water supply.

September 15 and 16—How to Save Loveland’s Water Supply 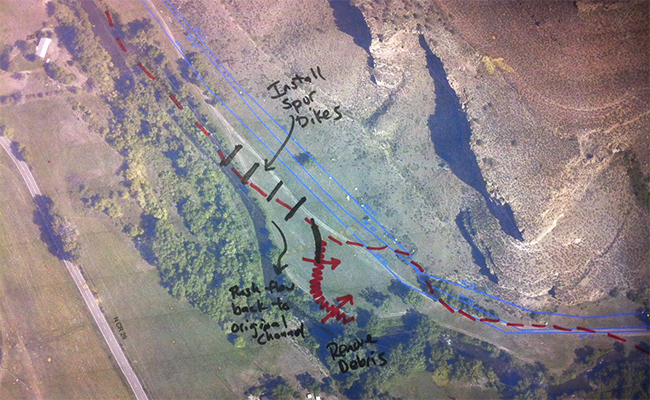 On Sunday, September 15, Evans was called to the City’s water treatment plant to confront an emergency with its three water supply lines.

“The Big Thompson River had shifted 200 to 300 feet from its original course and had uprooted a 20-inch water main and severely damaged a 36-inch water main,” Evans says. “The remaining 48-inch line was the only one they had left to supply the city, and the river was currently running over the top of it.” Water lines must be embedded to be secure.

Evans, his former co-worker, and engineering consultants local firm Ayres Associates discussed how to move the river back to its original course. After discussing numerous options at length with City staff and other community stakeholders, the group reconvened on Monday morning, joined by local construction firms. Their main objective as the flooding raged was to build a road into the area to bring in large rocks to build spur dikes (temporary levees).

“I called Bob Mussetter from DIV’s Surface Water Group in Fort Collins to come out to the site,” Evans says. “The group of consultants and City engineering staff discussed options and arrived at a plan to move the river away from the water supply lines.”

“The plan then called for installing a series of spur dikes to push the flow off of the left bank and toward the original flow channel and to run a final dike across the river to deflect the entire river back to its original path,” Mussetter explains.

That day, Evans and City staff got permission from the property owner on the other side of the river to drive an excavator through his property.

September 17—Putting the Plan into Action

At 7 a.m. on Tuesday, September 17, Evans brought Tetra Tech junior project engineer Aaron Orechwa to the site to review the plan again with City staff and the contractor. Evans helped direct the excavator operator to remove the debris blockage and clean the original channel, while engineers from the local firm directed the contractor to install the spur dikes on the other side of the river.

“Working together we got the river rerouted into the original channel,” Dan says.

This impromptu team’s fast and effective work over three days—a project that ordinarily would have taken several weeks—kept the last artery of Loveland’s water supply operating. Their efforts preserved the flow of drinking water for all but 73 of Loveland’s 68,000 residents.

We thank our employees for their efforts to help their community in a time of need.