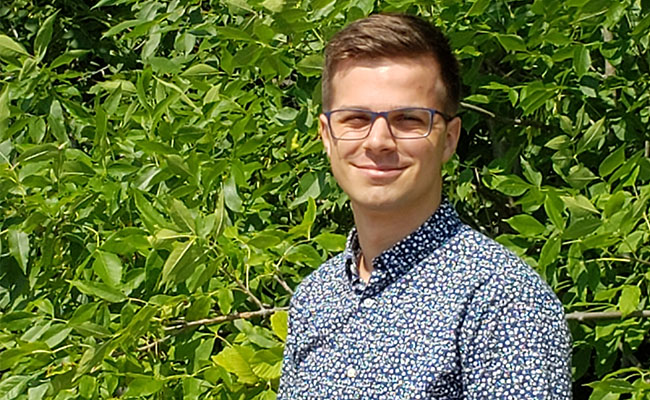 The first factor that attracted me to Tetra Tech was their global outreach program. I knew I wanted to work for a company that made a positive impact in the world. In 2016 I did a four-month international cooperation internship in Nepal to improve the socioeconomic conditions of a milk cooperative, so I know the importance of helping developing countries by sharing technological expertise. When I first heard about Tetra Tech, it was from one of their employees in Quebec, Canada, who was working on electrical grid projects in Africa, which was exciting to me.

What inspired you to get into electrical engineering?

One of my first internships was for a high-voltage generator manufacturer—I helped design alternators for hydroelectricity plants. This internship ignited my interest in high-power projects and led me to specialize in electrical energy during the last year of my degree by following the Institute of Electrical Engineering of Energy’s program at Polytechnique Montréal.

I was born and raised in the Province of Quebec. I was always eager to learn more about hydroelectricity because 95 percent of the province’s electricity comes from this type of renewable energy. However, I never intended to limit my knowledge only to hydroelectricity. Since I am interested in environmental issues, I strive to acquire more renewable energy expertise, such as wind and solar power.

One of the first projects that I worked on was for the replacement of the Timiskaming Dam, which is located on the border of Quebec and Ontario. This dam was rebuilt in the 1930s following a foundation failure, and although it is still safe, it is nearing the end of its useful life and needs to be replaced. Tetra Tech provided engineering design services for this project, and my supervisor was the electrical project manager with me as his assistant.

I did power flow calculations to determine the electrical needs of the dam, and I sized all the cables and conducts accordingly. For past projects, I was usually involved only in technical duties and never involved with the coordination aspects of the project. My goal as an engineer has always been to lead and coordinate an electrical project, and I achieved this goal when I was granted more responsibilities for this project. For instance, I needed to coordinate the location of all my electrical equipment with the other disciplines’ needs (e.g. mechanical, structural) and make sure that the electrical needs of every discipline were satisfied. I was not working alone on technical tasks anymore—I was involved in a multidisciplinary team where I was performing the electrical coordination alongside my supervisor. This project confirmed that I was following the right career path.

Tetra Tech has an infinite resource of technological opportunities. Since I started working here, all my projects have been unique and in my field of interest. After earning my degree, I had the opportunity to learn and grow as a junior engineer thanks to the help of my colleagues. Additionally, Tetra Tech always welcomes new ideas from and presents opportunities for everyone. For instance, I developed an interest in solar energy, so Tetra Tech encourages me to attend training sessions and work on solar projects. Tetra Tech has the resources and the outreach to match your ambitions.