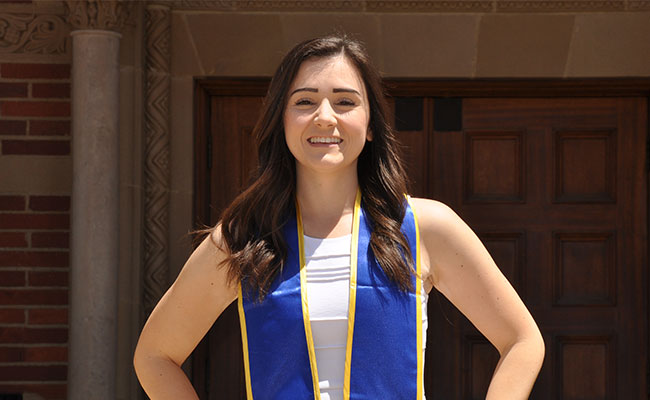 Megan Hanrahan is a design engineer at Tetra Tech, specializing in structural engineering. She has a Bachelor of Science in Civil Engineering from University of California, Irvine, and a master’s degree in Structural Engineering from University of California, Los Angeles. She passed the national PE exam and is currently in the application process for the California survey and seismic exams. We spoke with Megan as part of our #TtInspires campaign celebrating the passion of Tetra Tech employees. Follow #TtInspires on social media for more stories.

I started as an intern for Tetra Tech in 2014 and was hired as a full-time employee when I graduated from college. I was really interested in the environmental sustainability aspect of Tetra Tech’s work, and I want to design and build projects, while being conscious of the environment and low-impact development. When I heard that Tetra Tech was hiring, I looked on the website at the projects that were posted there. I was especially drawn to the humanitarian projects that were being done, and I have worked on some really cool projects since starting here.

Right now, I am working on the 6th Street Bridge-Park project in Los Angeles, California. The 6th Street bridge is a historical part of Los Angeles. It is great knowing that I am working on a project that is a part of a historical landmark and will be a new landmark with a park underneath, with places for people to come and hang out. I am excited see that project, which is dirt right now, become something people will enjoy.

I have also worked on a lot of stormwater recapture projects. In California we have been dealing with a drought for a long time, and Tetra Tech has helped several cities in the state move towards using recycled water to irrigate parks and not wasting water. I think that will be the future—we will have to use recycled water, and it is exciting to be part of making it happen. There are some projects that have just completed construction, some that are starting construction, and some that are in design.

I also worked on the Taylor Yard Bridge project. I was mostly involved in the bikeway design along the Los Angeles River leading up to the bridge. This was my first experience working with an architect. Since I am a structural engineer, it was a good introduction to the type of professionals who I will work with closely in the future. The architect is designing a bridge that will lead to a park. I will be able to see the construction process, which is exciting.

What do you do outside of your work that you think makes a difference for today’s environment?

I am starting to get into the zero-waste movement. I like the idea of reducing waste by making small changes in your life. Plastic pollution is an especially big issue, so I like doing my part to reduce the impact on our oceans and the environment. It takes some time to fully transition away from using plastic, but I am trying to be more conscious of taking better care of the environment.