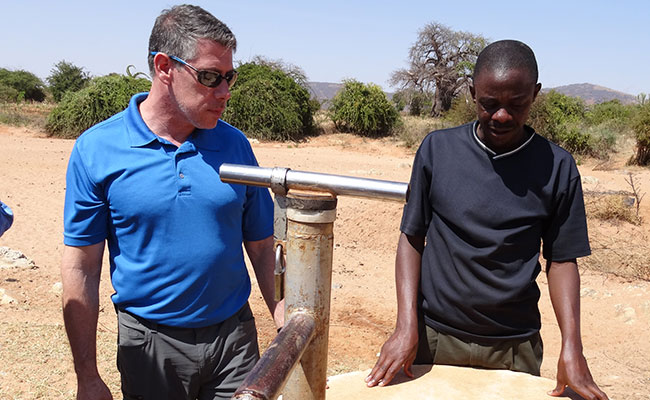 Tetra Tech is working with the EWB Boston Professional Chapter to provide clean, safe drinking water to the residents of Mkutani, Tanzania. 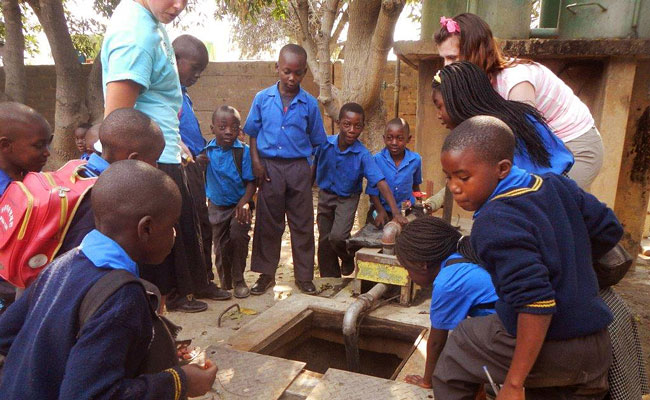 Tetra Tech is supporting the EWB Hamptons Road Professional Chapter to enhance the existing water system at the Josephine Fogg School in Zambia. 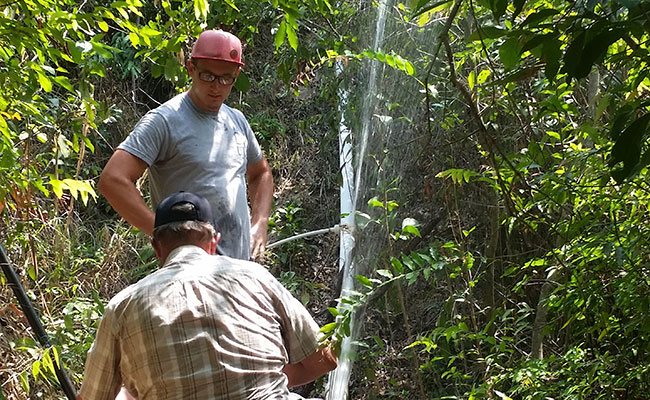 Tetra Tech is working with the EWB Sacramento Valley Professional Chapter to implement a sustainable water distribution system for the community of Tranquilla Norte, Panama.

Tetra Tech’s long history of support for Engineers Without Borders (EWB) is driven by our employees’ passion to use their skills to help communities in need. Our employees support EWB at every level—from holding leadership positions on boards to serving as technical leads for projects and mentoring EWB student chapters. We are proud to support our employees who volunteer their time and expertise to help communities around the world to improve their infrastructure and gain access to critical services such as clean drinking water and electricity.

Each year through our EWB Grant Program, we fund projects in which our employees are actively involved. We asked employees involved with our 2016 grantee projects to discuss what motivates them to support EWB. They reported being excited to make a lasting impact on communities in need while building their own skills and relationships in the engineering community. Below you will hear from three employees about how working with EWB has influenced their careers.

Michael joined the EWB Boston Professionals Chapter in January 2015. He quickly jumped into leadership roles: coordinating membership meetings; serving as project manager for his chapter’s water system repair project in Mapinduzi, Tanzania; and serving on the design team for the chapter’s water supply project in nearby Mkutani, Tanzania. Tetra Tech is providing funding to the Mkutani project to help bring clean, reliable water to the village’s 2,800 residents. They had been relying on a silty, salty, bacteria-infested river that dries up during part of the year. As a civil and environmental engineer with more than 35 years of experience, Michael brings vast technical knowledge of well drilling and installation to the project.

Michael’s involvement with EWB has brought a new set of skills and professional connections to his engineering career. He has learned to manage challenges inherent to a volunteer-driven project, including the impact of team members who have to leave when other priorities arise. Michael has seen how essential a team’s commitment and perseverance are to keep the project moving. In addition, he has made new connections in the professional engineering community and grown his network of collaborators. Michael remarked how this project also provided him the opportunity to learn more technical skills from individuals who have experience in areas he does not—improving his overall skill set.

“After a year of planning, fundraising, and designing, I was excited to go on my first trip to Tanzania where I saw all of our hard work turn into real projects,” said Michael. “I went with a great group of professionals from the Boston area, as well as a student group from Harvard University.”

Michelle’s EWB involvement began during her freshman year at Cal Poly San Luis Obispo and grew from there. A few months into her time at Tetra Tech in 2014, she joined the Sacramento Valley Professional Chapter. She currently serves as co-project manager for the chapter’s Tranquilla Norte Water Project in Panama. Tetra Tech is providing funding to help develop a sustainable water distribution system that can deliver a reliable supply of potable water to meet the needs of the Tranquilla Norte community.

For this project, Michelle creates project schedules and budgets; organizes report writing; and helps with fundraising, travel planning, and the technical aspects of the project. Michelle said that the most valuable lesson she has learned from EWB is that the solution is almost never a straightforward, standard method. Her involvement with EWB has allowed her to use her creativity, ingenuity, patience, and communication skills to work with the community to develop a relationship based on trust.

“EWB reminds me why I became an engineer,” said Michelle. “A goal of mine has always been to use my knowledge as an engineer to improve infrastructure in developing countries, whether through EWB, my career, or both. I hope to use my engineering degree for water infrastructure projects, because water is such a vital resource that I want to help conserve and clean.”

Jacqui’s longstanding involvement with the Josephine Fogg School in Kafue, Zambia, began when her mother, for whom the school is named, helped build the original preschool building in 1986. After learning about Tetra Tech’s relationship with EWB, in 2013 Jacqui connected with the Hampton Roads Chapter. The chapter is now supporting improvements to the school’s water supply project. The school has long been plagued with water problems as its growth outpaced its water supply system. After further assessment, the EWB team determined that a new well was needed to support the water supply needs of the school’s 600 students and staff. EWB volunteers traveled to Kafue in early 2016 to oversee the installation of the well. With support from Tetra Tech, they are now working to update the school’s water distribution system so that all areas of the school have adequate water pressure for drinking, hand washing, and toilet flushing.

As a member of the project team, Jacqui has helped EWB make local contacts and connections in Kafue and introduced them to the school, teachers, and community. Through her involvement with EWB, Jacqui learned about the values of teamwork and the majesty in volunteerism, but she also learned about new engineering concepts. As a manager of global health and education for Tetra Tech, Jacqui’s knowledge of health issues in education provided the team with insights about the problems that children in the developing world face every day.

“I am not an engineer,” said Jacqui. “My background is in health and education and Department of State work, so I was a little intimidated in the beginning. When a complete analysis of the water quality flowing through the school arrived in my in box, I was flummoxed. I then started to enjoy this new role and plunged in. I seconded colleagues within Tetra Tech to interpret the water quality breakdown for me and followed the journey of the Hampton Roads Chapter to Zambia, the drilling of the new well, and our latest project of raising the water tanks so the water flows down.”

“EWB is a wonderful organization, bringing people together from many areas, having different skill sets—and all of them changing the lives of others for the better,” Jacqui said.