The Salvadori Center honored Marvin Mass with a Special Recognition award for his lifetime contributions to architecture and engineering and for the publication of his book The Invisible Architect. The ceremony took place at the Center's benefit event on May 1, 2013, in New York. 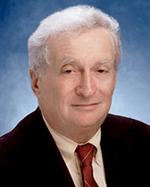 Mr. Mass began his career at Cosentini, A Tetra Tech Company, in 1952 and since then has been responsible for the ongoing development and enhancement of the firm's standards of design, construction, and supervision. Mr. Mass's distinguished career includes such pioneering achievements as the design of New York City's first total energy and chilled water storage plants, the application of waterside economized air conditioning systems for office buildings, eutectic salts and vacuum tube solar collector systems, and the systems within the renowned Solar Energy House at the University of Delaware.

His latest book, The Invisible Architect, provides an insider's view into some of the most important buildings and architects of the last half century. Citing examples from his distinguished body of work, richly colored by illuminating and often hilarious personal anecdotes, Mass shows how buildings and our expectations of them have changed with the contemporary development of environmental controls.

Mr. Mass is a long-standing faculty member at Harvard's Graduate School of Design and at Yale University, and has lectured at the University of Pennsylvania, Pratt Institute, and Cooper Union. His awards include the Brown Medal of the Franklin Institute and the 1990 AIA Institute Honors, as well as a lifetime achievement award from the American Society of Heating, Refrigerating, and Air Conditioning Engineers. Mr. Mass holds his Mechanical Engineering degree from New York University and is a licensed mechanical engineer in 23 U.S. states. He is a member of the National Society of Professional Engineers, the New York State Association of the Professions; the American Society of Heating, Refrigerating, and Air Conditioning Engineers; the Building and Architecture Technology Institute; and the Institute for the Study of the High Rise Habitat. He is also an Honorary Member of the American Institute of Architects.