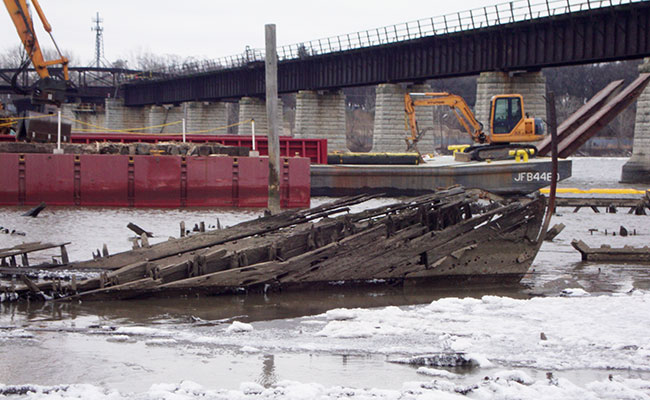 Five historic shipwrecks are located in the area of the Lower Fox River remediation project in Wisconsin. Tetra Tech helped ensure the wrecks are being preserved for educational purposes and the remediation efforts could continue.

The vessels sat at the bottom of the Fox River since the early 1900s when scuttling—purposely sinking ships—was common. The wrecks were beneath the waters on the west side of the river, about half way between the De Pere dam and the Bay of Green Bay.

“The boats need to be removed so that we can dredge and cap the river bottom,” said Bill Coleman, Tetra Tech’s Project Manager. The Lower Fox River Remediation project to remove polychlorinated biphenyls (PCBs) is the largest of its kind in U.S. history. Tetra Tech has led the remediation efforts since 2009.

Since the usual requirement of cleaning the ships for historic preservation was impractical, they were photographed extensively for educational purposes and for a public exhibition. Our team worked with an archaeologist to document the removal of the wrecks. Findings thus far reveal that some of the ships were constructed differently than expected, including a barge that had a steel frame rather than a wood frame—a new discovery about 19th century shipbuilding in the area.

"Shipwrecks are time capsules, literally, of the past," says Kevin Cullen, curator at Green Bay’s Neville Public Museum, which will host the photographic exhibit next summer. "They are ways that we can understand what was coming and going between particular destinations, the people that transported goods on those vessels, the stories they had, how their lives were impacted in the community."

“Facilitating the removal of these shipwrecks demonstrates that Tetra Tech knows how to work with regulators and mitigate the impact of our work on sensitive resources such as these shipwrecks,” says George Willant, Tetra Tech’s Deputy Project Manager.