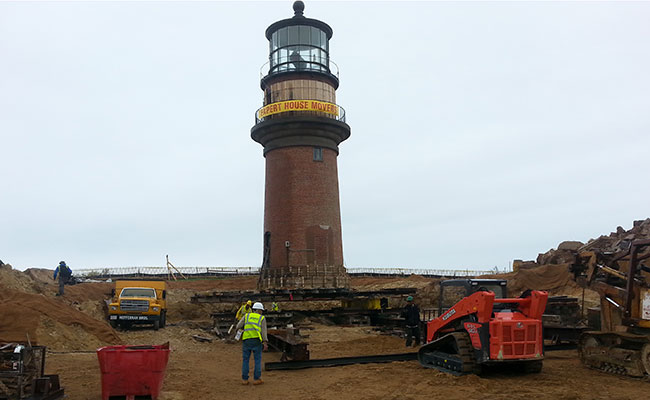 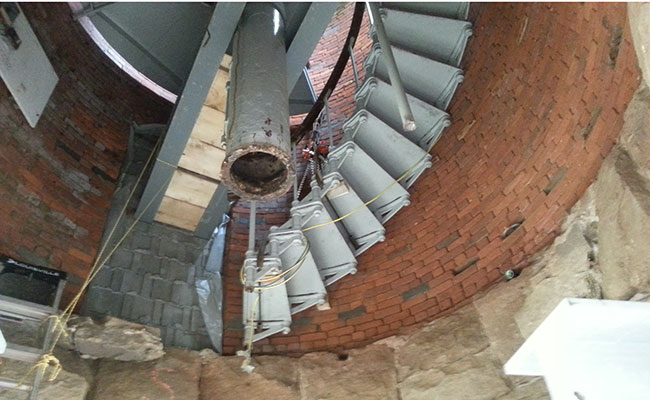 The National Trust for Historic Preservation included the move of the Gay Head Light in its list of top historic preservation wins for 2015. Tetra Tech is honored to have supported the preservation of this national treasure. Read the report on CNN.

The historic Gay Head Light on the west end of Martha’s Vineyard was endangered due to the ongoing erosion of the adjacent Gay Head cliffs. The brick structure has broadcast a critical warning light for mariners off the coast of Martha’s Vineyard in the town of Aquinnah, Massachusetts, for nearly 160 years. In 1844 a previous wooden lighthouse at Gay Head cliffs was moved back due to erosion, and the current brick structure replaced it in 1856. The iconic lighthouse recently was listed as one of the most endangered historic landmarks in the United States.

The natural erosion of the Gay Head cliffs, which often resulted in loss of several feet per year, required the lighthouse to be relocated as soon as possible. Delays would increase the risk of it being too close to the edge to move safely.

As the environmental consultant for the project, Tetra Tech was part of a team that successfully moved the structure 129 feet in just 3 days. This highly visible and important project has been highlighted in media nationwide, including the Boston Globe. A documentary of the move is currently being created for the PBS series NOVA.

Tetra Tech is advising the town of Aquinnah on soil management to ensure the land use control requirements for the site are met. Our team employed our experience with lead-impacted soil; our knowledge of the site, its regulatory requirements, and the health and safety issues; and our previous experience working with the Coast Guard on this property. Tetra Tech has developed a soil management plan and is supporting the town of Aquinnah with coordination with the Coast Guard, the U.S. Environmental Protection Agency, the Commonwealth of Massachusetts, and the various contractors involved with the move.

Tetra Tech is honored to be part of such an amazing team of contractors and consultants who worked cohesively to complete the move of the lighthouse ahead of schedule. Now safely on solid ground, the light will continue to serve as a warning beacon to ships for another 150 years. For updates on the continuing project, visit www.gayheadlight.org.