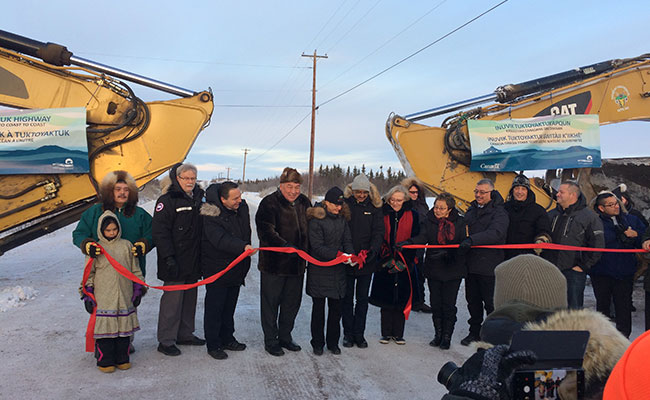 Tetra Tech was part of a team that planned and designed the award-winning Inuvik Tuktoyaktuk Highway (ITH) to connect communities along Canada’s Arctic Coast.

The Association of Consulting Engineering Companies-Canada (ACEC) and Canadian Consulting Engineer (CCE) magazine selected the Tetra Tech-Stantec team for an Award of Excellence for innovation in planning, designing, and constructing the highway. Collectively, Kiggiak-EBA (Tetra Tech), Kavik Stantec, and the client—EGT Northwind Ltd.—were working for the project owner, the Government of the Northwest Territories. ACEC and CCE presented the award at their awards gala on October 23, 2018, in Ottawa, Ontario.

The all-weather ITH connects the remote communities of Inuvik and Tuktoyaktuk in the Northwest Territories. The project fulfills a federal and territorial government commitment to connect Canada’s Arctic Coast to the rest of the country. Our team provided a safe, economical, and resilient design that could be constructed on particularly challenging, ice-rich, thaw-sensitive permafrost terrain.

The team placed more than 3 million cubic meters of embankment material, constructed 8 bridges, and installed more than 300 culverts for the two-lane gravel highway project. Because the permafrost’s top layer thaws during summer and cannot support construction equipment, the team undertook construction in winter, in darkness, with temperatures often below –30°C. Due to the remoteness of the site and difficult construction conditions, the team designed all bridge elements to be prefabricated and assembled on-site. All above-ground structural elements were made from welded steel or precast concrete to accommodate the winter construction schedule.

The project also was designed to meet the Government of the Northwest Territories’ objective to use local labor, resources, and equipment for construction.

Congratulations to the whole team on creating a safe, reliable, year-round transportation system for the people of the Inuvialuit Settlement Region.