BioCNG—Vehicle Fuel for a Green Future 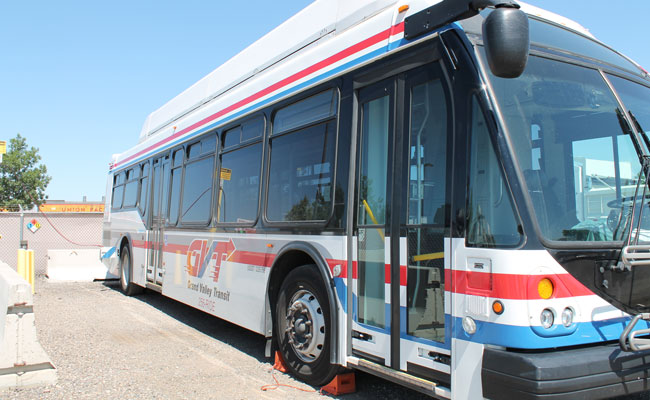 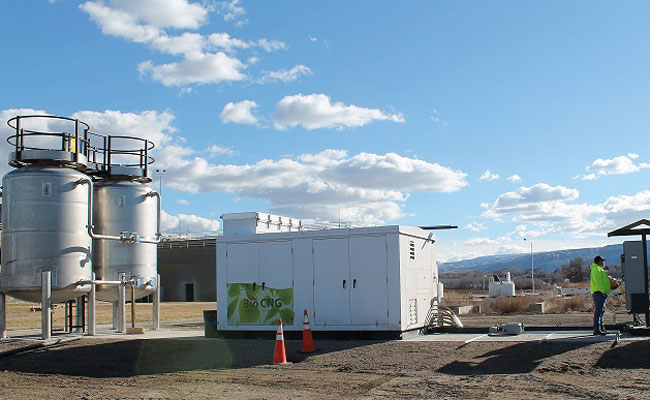 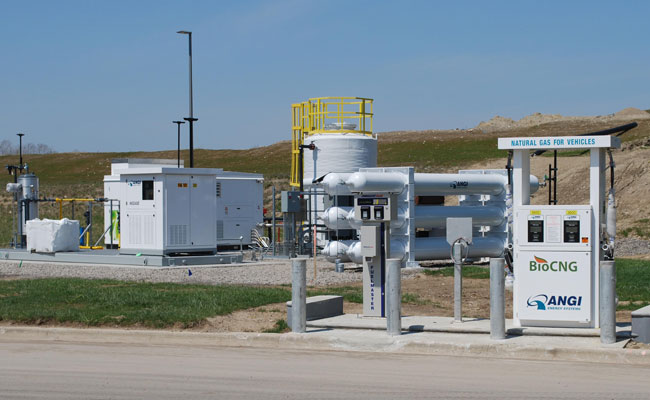 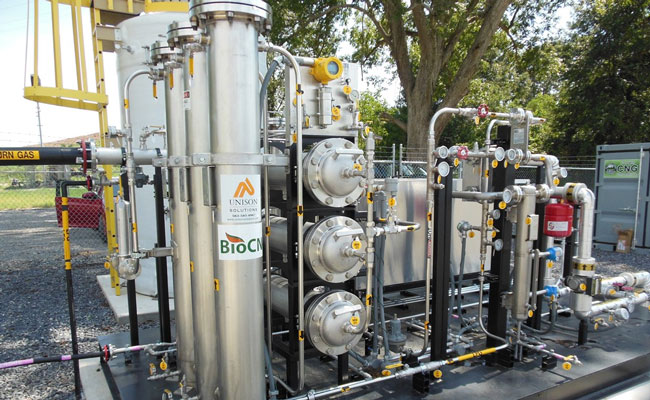 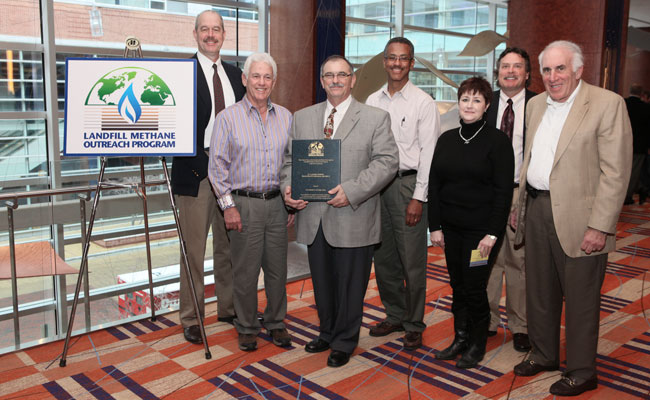 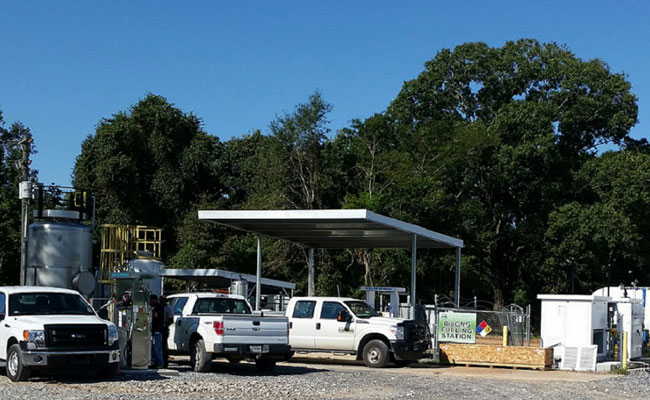 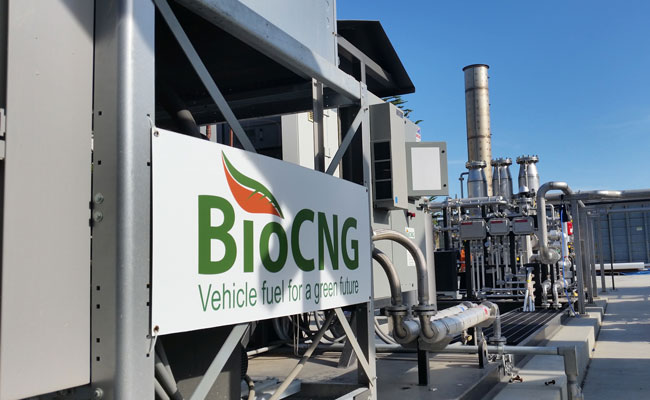 Cornerstone developed the system in response to the growing interest in lower cost alternative vehicle fuels. At less than $2 per gallon of gasoline equivalent (GGE), BioCNG is the least-cost alternative clean vehicle fuel available and is competitive with gasoline and natural gas. The system allows owners to fix their fuel costs for 10–20 years and helps meet aggressive national goals calling for reducing dependence on foreign oil by increasing the availability and use of domestic resources. ¬It offers a renewable fuel alternative not dependent on foreign producers or fluctuating market prices.

The BioCNG system is modularized and is one of the only systems in the marketplace that is cost-effective for smaller-scale projects. The few competing technologies are designed for larger scale applications. The BioCNG system uses 20–400 standard cubic feet per minute (scfm) of biogas to produce 100–2,400 GGE of BioCNG per day. The modular BioCNG system can easily be expanded to respond to increased gas production by parking several BioCNG units next to each other. This arrangement increases system capacity while providing redundancy so maintenance can be performed.

“The BioCNG system was developed using proven industrial gas conditioning technologies to economically address small-scale biogas producing facilities,” said Cornerstone’s Steve Wittmann, project manager for several of the BioCNG projects. “The technology quickly demonstrated that even a 50-scfm biogas source can produce the equivalent of 250 gallons of gasoline each day, resulting in significantly higher revenue and environmental benefits than have been obtained from traditional biogas to energy projects.”

Cornerstone conducted a rigorous gas composition analysis to demonstrate that the fuel produced by the BioCNG system is acceptable for use in CNG engines. The evaluation determined that the system produces a fuel that meets or exceeds both the SAE J1616 Recommended Practice for Compressed Natural Gas Vehicle Fuel and heavy-duty natural gas engine manufacturer Cummins Westport’s fuel specifications. In addition, the volatile organic compounds found in BioCNG fuel were compared to those in pipeline natural gas. The data showed that the main gas constituent concentrations of the fuel are similar to those in natural gas. The main difference is that BioCNG typically contains fewer heavy hydrocarbons (such as ethane). After cleaning and conditioning, the BioCNG fuel can be used directly in CNG vehicles or mixed with natural gas.

The system performs extremely well, with few maintenance issues or instances of downtime. BioCNG system operation and maintenance costs are about 16–25 percent of the price of conventional gasoline. Actual system prices depend upon site conditions and the number of vehicles being fueled from the system.
The first BioCNG system was installed in December 2010 at the Rodefeld Landfill in Dane County, Wisconsin. It has been operating successfully since March 2011, converting landfill methane gas into CNG fuel for county-owned vehicles at a fraction of the cost of gasoline.
Today the BioCNG system is converting biogas into CNG at seven locations across the United States for less than the cost of gasoline. Two of the locations recently expanded their CNG production by adding an additional BioCNG system. Some of the projects have received alternative fuel production tax credits or rebates through state programs and renewable fuel credits through the UEPA’s Office of Transportation and Air Quality.

The BioCNG system is working well in California, Louisiana, and Colorado. “Our clients aren’t buying a standalone BioCNG biogas conditioning system,” notes Cornerstone’s Wittman. “They are buying an integrated BioCNG vehicle fueling system. The exciting part of these projects is to understand the client’s needs and design a total fueling system that addresses those needs and integrates with the client’s facilities.”

Cornerstone developed the BioCNG system for CleanWorld’s Sacramento BioDigester at the Sacramento South Area Transfer Station in Sacramento, California. The project was awarded the 2013 International Bioenergy Project of the Year at the Renewable Energy World Power Engineering awards gala in Orlando, Florida. The facility is a public-private partnership between the County of Sacramento, which owns the site, and CleanWorld, which owns and operates the BioDigester facility. Local hauler, Atlas Disposal Industries, built and operates an adjacent CNG fueling station that fuels local fleets with renewable fuel created by the digester.

The BioCNG system uses about 100 scfm of gas from the food waste digester, which yields up to 600 GGE per day in fuel. Cornerstone provided fabrication, materials, and start-up of a biogas conditioning skid for use with an existing CNG fueling station. Additional work included site equipment layout and piping design, integration with CleanWorld’s digester equipment, and integration with the CNG fueling station.

Cornerstone designed the original site layout, piping, condensate management, waste gas flaring, and controls to accommodate an additional BioCNG unit, and expansion of the facility is now complete. The BioCNG 200 has the capacity to produce an additional 1,200 GGE per day of fuel.

As Michele Wong, CleanWorld’s CEO, noted, “The scalability of BioCNG’s skid-mounted units match well with CleanWorld’s modular approach and allowed the gas refining technology to be scaled-up efficiently along with the digester as the system capacity was increased from 25 tons per day to 100 tons per day.”

“We were really excited to work on this project and thrilled that the City of Sacramento had the vision needed to make this project a reality,” said Mike Michels, Tetra Tech’s solid waste initiative leader. “The city refers to the project as a ‘farm to fork to fuel’ project, which is a great way to express the growing understanding that our resources are precious and touch all aspects of society. We are especially proud that this is California’s first commercially available carbon-negative fuel.”

The original system produced up to 210 diesel gallon equivalents (DGE) per day of BioCNG vehicle fuel, at less than the cost of diesel. The fuel is produced from 50 scfm of biogas, containing 52–56 percent methane. The parish initially used the fuel to power 15 sheriff’s department vehicles and district support vehicles.

In 2015, the project was expanded to include an additional BioCNG system and a remote CNG fueling station supported by a CNG tube trailer that transports the BioCNG from the landfill to the remote station. BioCNG designed, installed, and commissioned this “mother-daughter” BioCNG station format—the first of its kind in the country. A new unit tripled the fuel production to 630 DGE per day.

The expansion is part of a contract between St. Landry Solid Waste Disposal District and Progressive Waste Solutions. In exchange for continuation of its existing waste hauling contract with the district, Progressive Waste agreed to purchase new CNG-powered trucks and fuel from the increased BioCNG generated from the expanded system. The completed project also will provide BioCNG fuel to additional St. Landry Parish clients.

District executive director Katry Martin was especially happy about the latest expansion, saying, “The fact that the hauler that delivers waste to the parish landfill will fuel its trucks with the biogas generated from the landfill is a true example of the power of renewable energy sources and a preview of the future of biogas.”

The expansion is part of a contract between St. Landry Solid Waste Disposal District and Progressive Waste Solutions. In exchange for continuation of its existing waste hauling contract with the district, Progressive Waste agreed to purchase new CNG-powered trucks and fuel from the increased BioCNG generated from the expanded system. The completed project also will provide BioCNG fuel to additional St. Landry Parish clients.

Cornerstone completed a BioCNG system installation at the Persigo Wastewater Treatment Plant (WWTP), which is jointly owned by the City of Grand Junction and Mesa County, Colorado. Cornerstone provided design, permitting, construction management, and system commissioning and start-up. Additional work included design and installation of an option to preferentially use BioCNG in the WWTP digester boiler instead of natural gas, thereby saving on treatment plant operating costs.

The BioCNG system will produce up to 500 GGE per day from the WWTP digester gas, which is piped about 6 miles to Grand Junction’s existing fast and time fill CNG fueling station. The BioCNG will fuel a fleet of buses owned by Grand Valley Transit (GVT) and fueled at the City of Grand Junction facility, as well as city refuse trucks, street sweepers, and general utility pickup trucks. The City of Grand Junction and GVT continue to purchase additional CNG vehicles to increase the overall CNG fleet.

“We are extremely proud of this project, which has allowed us to utilize the biowaste at the wastewater plant to create fuel for our own fleet,” said Tim Moore, Grand Junction’s interim city manager. “It has really put us on the map in terms of alternative fuel use, and we are realizing a direct benefit from the resulting energy and cost savings.”

Michels summed up the discussion, “All of us at Cornerstone are very excited about BioCNG. It is very encouraging for us to be able to contribute to sustainability through the generation of renewable fuels. The modular nature and flexibility of the technology make BioCNG perfect for so many practical vehicle fuel applications.”